Being confused all the time about whether an object or building actually is Art Nouveau or not, made me decide to get my facts straight and learn to recognise the characteristics of the style, and understanding its background.

In order to understand the situation in which Art Nouveau emerged, we’re going back in time to find the Industrial Revolution taking place in the 1850s. People felt rich and wanted to have things that before only really rich people could afford. Thanks to mechanisation (cheap mass production) imitations of luxury products and ‘art’ were made affordable to everyone. Previous styles were copied and quality was no longer important. Anyone could now live in ‘style’!

The Arts and Crafts Movement

As could be expected, the traditional craftsmen did not appreciate this new direction at all! They insisted on hand made, quality products. On the British Isles, these craftsmen formed the ‘Arts and Crafts Movement’, led by John Ruskin and later by William Morris. Their objective was to create beautiful yet sustainable products for the ordinary man. ‘Arts and Crafts’ is therefore not a style, but rather a philosophy. A design principle. For inspiration, they looked back at designs from befóre the industrial revolution. To the late Middle Ages and to Gothic design. Logically, their principle failed as hand made products are so much more costly than mass produced imitations, and their ordinary man could not afford them.

In 1892, Walter Crane (1845–1915) wrote ‘The Claims of Decorative Art’ which inspired many craftsmen of his generation, and of later generations. Being an English artist and book illustrator, and a member of the ‘Arts and Craft Movement’, it was his objective to bring art into the daily life of all classes.

Over at the mainland of Europe, artists and craftsmen had a lot of admiration for Walter Crane’s theory and the English ‘Arts and Crafts Movement’. And those continental craftsmen were the ones that actually evoked a real change! They were ready for a new art, an Art Nouveau, based on creativity and craftsmanship. Inspired by nature, they wanted no more copying of styles from the past and no more mass production. And the ideal was also for thís movement to surround the ordinary man with beauty. Yet again, we must conclude that the socialist principles behind Art Nouveau failed as it was utterly luxerious and too expensive for ordinary people. Artistically though, it became a huge success!

Majorelle had lofty ideals about making fine design for the masses, but its expense ensured the clientele was solidly bourgeois. He failed in his egalitarian impulses, as William Morris had before him.1

Thanks to the philosophy that people should be surrounded by beautiful products, Art Nouveau became a ‘total style’, meaning that it included a wide array of artistical territories – architecture, jewellery, lighting, printed fabrics, furniture, household silver and other utensils, wallpaper, typography and graphic design etc. “Art should be a way of life!” 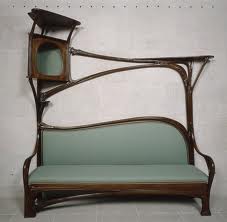 The new art style developed in many countries at the same time, and was called diffently in each country. Nowadays, ‘Art Nouveau’ and ‘Jugendstil’ are accepted internationally as the generic terms. Here are some of the names that are used in different countries:

Because Art Nouveau developed simultaneously over a large geographical area, there are considerable differences between the local varieties. In Belgium the so called whiplash was very popular where as in France more realistic lines were used and in the Netherlands, geometrical forms were rather popular. There are some characteristics however, that clearly all local varieties have in common:

The flowing (moving) lines are probably the best known characteristic of Art Nouveau. They are supposed to express the emotion of this new period in time, a time that can be characterized by movement. We can find the lines in balconies, banisters, facades, etc.

The flat-perspective and strong colors of Japanese woodcuts, especially those of Katsushika Hokusai, had a strong effect on Art Nouveau. The wave of Japonisme that swept through Europe in the 1880s and 1890s was particularly influential on many artists with its organic forms, references to the natural world, and clear designs that contrasted strongly with the reigning taste. Besides being adopted by artists like Emile Gallé and James Abbott McNeill Whistler, Japanese-inspired art and design was championed by the businessmen Siegfried Bing and Arthur Lasenby Liberty at their stores in Paris and London, respectively. 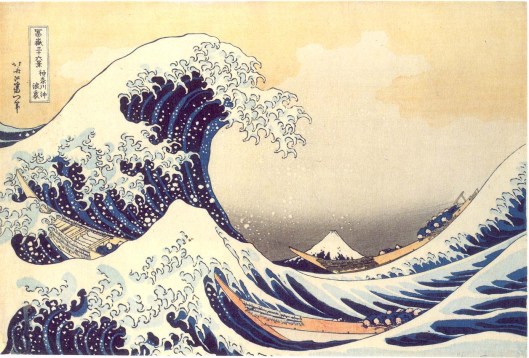 Siegfried Bing (1838–1905) was a German art dealer in Paris, who was prominent in the introduction of Japanese art and artworks to the West and the development of the Art Nouveau style in the late nineteenth century. In December 1895 he opened his famous gallery, the Maison l’Art Nouveau, which showed works of artists of what would become known as the Art Nouveau movement. Henry van de Velde designed the interiors of the gallery, while Louis Comfort Tiffany supplied stained glass. Bing’s gallery featured entire rooms designed in the Art Nouveau style by his stable of in-house designers. During the gallery’s most successful period, 1896–1902, Bing handled a wide range of artistic work, included fabrics designed by William Morris, glassware by Tiffany, jewelry, paintings, ceramics, stained glass, and furniture in the Art Nouveau style.

Bing’s activities were important, perhaps crucial, to the Japanese influence on Art Nouveau. He published a monthly journal, Le Japon Artistique, which began in 1888 and was collected in 36 volumes in 1891. The journal is known to have had a great influence on artists like Gustav Klimt and George Hendrik Breitner. And here I come full circle again as this painting by Breitner was one of my favourite paintings when I was a little girl! I bought a postcard of the painting which hang above my bed for many years. 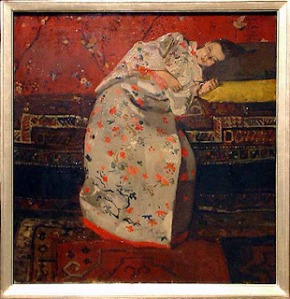 Thanks to industrialisation (and the opportunity to mass-produce) tiles experienced a major revival. They were waterproof, fireproof and pollutionproof, and relatively cheap (compared to plastering, they have a longer lasting wear and lower installation cost. They also cost far less than stone). And because they were easy to clean, they also became very popular with the rise of the bathroom and the greater appreciation of the benefit of hygene in the kitchen. In the late 19th century, epidemics were still very lethal! As you can see below, Art Nouveau artists adapted to this new building material quickly by designing the most beautiful handmade patterned tiles!

Also new building materials such as glass, reinforced concrete, cast iron & steel became available to Art Nouveau artists thanks to the industrial revolution. One of the main ‘new’ building materials was cast iron which had actually been invented in 6th century China. It was only after the industrial revolution that new production methods first allowed cast iron to be produced cheaply enough and in large enough quantities to regularly be used in big building projects. Cast iron was usually made from pig iron which had to be heated until it liquefied, and was then poured into a mould to solidify. It was mostly used for columns as cast iron is comparatively brittle but very strong under compression. (Not under tension!) Cast iron columns enabled architects to build tall buildings without the enormously thick walls required to construct masonry buildings of any height. Such flexibility allowed tall buildings to have large windows and let daylight enter. Slender cast iron columns could also support the weight that would otherwise require thick masonry columns or piers, opening up floor spaces in factories, and enabling architects of theaters, churches and synagogues to improve sight lines when supporting balconies. 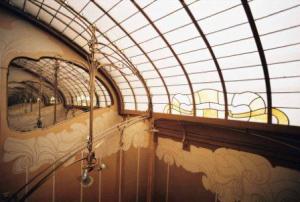 The use of large glass surfaces in buildings grew during the second part of the 19th century with the growing popularity of cast iron. Glass was used for functional reasons (large windows creating luminous living spaces) as well as decorative reasons (stained glass). And while stained and leaded glass let in the wanted light, it still provided privacy for the home owner. Skylights in private houses became a new phenomenon.

And last but not least, reinforced concrete was added to the list of new building materials. Though a concrete house was built as early as 1837 by J.B. White of England, cement did not become widely adopted until the 1850s and 60s when it was used for sewer systems. It nevertheless remained too expensive for large-scale use until the 1900s.

In 1879 the Belgian François Hennebique enclosed wrought iron beams in cement, initially, to protect them from fire and corrosion, as well as from the chemical fumes found in factories; From 1892, after several new discoveries had been done, Hennebique replaced the iron with steel and started to use his Béton Armé (reinforced concrete) in all supports (walls, columns, beams and ceilings). Equally important, he then started to realise that he needed to combine those supports into a monolithic element using hooked connections. This so called Hennebique system was one of the first appearances of the modern reinforced concrete method of construction.  The first building erected using this system was the 1897 Weaver Building in what was then the Docks area of Swansea.

The final step was taken in the early 1900s by Eugène Freyssinet, who recalculated all the formulas for reinforced cencrete and in the process re-developed pre-stressed concrete, which enabled curved supports to carry much greater loads and counteracted deterioration of the concrete itself under pressure. From here on, buildings could become much larger and could be built faster than ever before.

Although Art Nouveau was replaced by 20th-century modernist styles fairly quickly, it is considered today as an important transition between the historicism of Neoclassicism and modernism. Furthermore, Art Nouveau monuments are now recognised by UNESCO on their World Heritage List as significant contributions to cultural heritage. The historic center of Riga, Latvia (still on my bucket list!), with “the finest collection of Art Nouveau buildings in Europe”, was added to the list during 1997 in part because of the “quality and the quantity of its Art Nouveau/Jugendstil architecture”. And in the year 2000, four Brussels town houses by Victor Horta were added as “works of human creative genius” that are “outstanding examples of Art Nouveau architecture brilliantly illustrating the transition from the 19th to the 20th century in art, thought, and society”.

27 thoughts on “Art Nouveau from a historical perspective”