Alphonse Maria Mucha was born 24 July 1860 in the town of Ivančice, Moravia (in the present Czech Republic, but in those days under Habsburg rule). Although his singing abilities allowed him to continue his education through high school in the Moravian capital of Brno, drawing was his main hobby. Mucha pursued singing seriously for a while, but was forced to abandon it after his voice started cracking in 1875. Instead, Mucha took up drawing lessons. In 1877, he applied to the Academy of Fine Arts in Prague, but he was rejected with the message to “find yourself another profession where you’ll be more useful”. Lucky for us, this rejection did not discourage him, and he continued taking drawing classes. In 1879, he moved to Vienna to work for a major Viennese theatrical design company (Kautsky-Brioschi-Burghardt), while informally continuing his artistic education. This is where he first came into contact with the sensuality of the theatrical illusion.

When in 1881 a fire, in which 384 people died, destroyed his employer’s business (the Ringtheater), Mucha received his notice and returned to Moravia to do freelance decorative and portrait painting in return for board and lodging. In Mikulov, he met Count Karl Khuen Belasi who then commisioned Mucha to decorate the Emmahof Castle in Hrušovany with murals. In 1883 Mucha moved to the Tyrolian castle Gandegg of count Khuen Belasi’s brother, Egon, an amateur artist. Count Egon was impressed enough that he agreed to sponsor Mucha’s formal training. At last, at the expense of his patron, Mucha got the opportunity to commence an academic education. He first went to the Art Academy of Munich (in 1885) and two years later to the Academy Julian in Paris. In 1888 he moved to the Académie Colarossi, also in Paris. Unfortunately, soon after that, the count stopped sponsoring Mucha which forced him to make a living for himself. Mucha endured years of self-denial due to a ‘cheerful poverty’ that many young artists know so well, and survived primarily by working as a poorly paid illustrator for magazines.

In Paris, the center of the artistic world at that time, Mucha befriended artists like Paul Gauguin (1848-1903) and Henri de Toulouse-Lautrec (1864-1901) as they were all members of the same bohemian circle. Gaugain even shared a studio with Mucha for some time. Toulouse-Lautrec made, several years earlier than Mucha, furore designing posters for the performances of singer Yvette Guilbert and the dancer Jane Avril. Both actresses performed at the Moulin Rouge in the Montmartre district of Paris.

Just before Christmas 1894, Mucha happened to be at a print shop when there was a sudden and unexpected need for a new advertising poster for a play featuring Sarah Bernhardt, the most famous actress in Paris, at the Théâtre de la Renaissance on the Boulevard Saint-Martin. Mucha volunteered to produce a lithographed poster within two weeks, and on 1 January 1895, the advertisement for the play Gismonda by Victorien Sardou was posted in the city, where it

attracted much attention. The poster was revolutionary to the art of poster-printing, which had so far consisted of large amounts of text with a few simple illustrations, usually in just one or two colours. Also, the poster had a radically new vertical format and an unheard-of amount of colours and detail. The posters were at that time even robbed from the streets. Bernhardt was so satisfied with the success of this first poster that she offered Mucha a five-year contract to produce posters, as well as stage and costume designs.

Partly because of his contacts and because he joined movements such as the Salon des Cent, Mucha developed himself as the Art Nouveau artist par excellence. Mucha produced paintings, posters (Théâtre Sarah Bernhardt, Théâtre de la Renaissance, Salon

des Cent), advertisements (JOB cigarette paper, Moët & Chandon champagne), and book illustrations, as well as designs for jewelry, furniture, costumes, carpets, wallpaper, and theatre sets in what was termed initially “The Mucha Style” but eventually became known as Art Nouveau. Partly on the insistence of friends, among whom August Rodin, Mucha also started sculpting. Most of his sculptures were intended for the Universal Exhibition in Paris. Thanks to the 1900 Universal Exhibition, Mucha’s style was given international exposure. “I think [the Exposition Universelle] made some contribution toward bringing aesthetic values into arts and crafts.”

He was asked by the Austro-Hungarian government to decorate the Bosnia-Herzegovina Pavilion and collaborated with decorating the Austrian Pavilion. He also designed the exhibition poster, the catalogue cover and the exhibition banquet menu. To prepare himself for the decorating job of the Bosnia-Herzegovina Pavilion, Mucha traveled widely through the Balkan area’s, researching their history and customs. In this period, he first developed his idea for his Slav Epic project.

Art Nouveau artists often imitated Mucha’s work. The Art Nouveau movement however, was one that Mucha attempted to disassociate himself from throughout his life; he always insisted that rather than maintaining any fashionable stylistic form, his paintings were entirely a product of himself and Czech art. He declared that art existed only to communicate a spiritual message, and nothing more; hence his frustration at the fame he gained by his commercial art, when he most wanted to concentrate on more artistic projects.

However, like all other Art Nouveau artists, Mucha was convinced about the fact that people should be surrounded by art, every day. Art should be made readily available to the general public and be seen and enjoyed by as many people as possible. To create some kind of guide-book for craftsmen, he published a ‘designer bible’ in 1902, called “Documents Décoratifs“. I would love to get my hands on a copy of this book, because (at least to me) every page is precious.

On 10 June 1906, Mucha married the 22 year younger Maruška Chytilová (1882-1959), whom he had met in Paris, in Prague. The couple visited the U.S. from 1906 to 1910, during which time their daughter, Jaroslava, was born in New York City. In the U.S., Mucha gathered money to fund his new project, his Slav Epic. When returned to the Czech Republic in 1910 he devoted the rest of his life to a series of monumental works about the history of the Slavic people, the Czechs in particular. He hoped to stimulate a new sense of nationalistic patriotism after years of oppression of the Austro-Hungarian Empire. He worked eighteen years at the paintings. In 1919 the first eleven works were exhibited, but the reception was poor. In 1928 Mucha donated the entire Slav Epic to the city of Prague as a gift for the 10th anniversary of the independence of Czechoslovakia. In 1935, the canvases were rolled up and during World War II and the communist regime, they were completely forgotten. Only in 1963 were the canvases again exhibited at the Moravsky Krumlov castle, a few hours drive from Prague, from April to October, due to lack of heating. In 2011, the Slav Epic canvases were moved to Prague. Mucha himself thought this series his most important work. It expressed his patriotic feelings and his support for the Pan-Slavism.

After Mucha had returned to Prague in 1910, he also decorated the Theater of Fine Arts, and he contributed his time and talent to create the murals in the Mayor’s Office at the Municipal House, as well as other landmarks around the city. When Czechoslovakia won its independence (1918) after World War I, he was asked to designed the new postage stamps, banknotes, and other government documents for the new state. 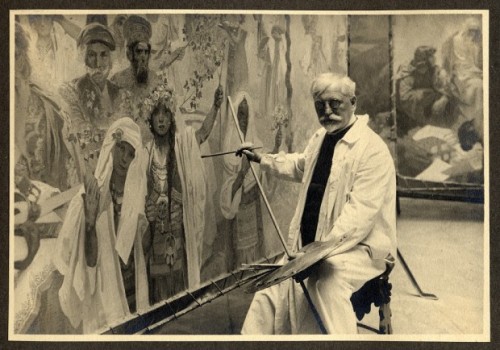 Mucha working on the Slav Epic

As Mucha was known to be a prominent Freemason, a Judophile and a champion of Czech freedom (and Pan-Slavism), he was considered an enemy of the new order. Old and ill, Mucha died from a pneumonia on 14 July 1939, after he had been incarcerated by the Nazis. Some documents state that he died in prison. Others state that he was released but died shortly after that. I can’t stomach the thought that a great artist like Mucha had to die alone in a prison cell, like an ordinary criminal. Let’s just hope he actually wás released, and died at home, in the arms of his beloved wife. The Slav Epic remained uncompleted.

Mucha’s son Jiří, (born 12 March 1915 in Prague) later became a journalist, writer, screenwriter and an author of autobiographical novels and studies of the works of his father. After Jiří died 5 April 1991 in Prague, his wife Geraldine and son John have established the Mucha Foundation in 1992. Geraldine Mucha passed away recently at her home in Prague (12 October 2012) at the age of 95. Now, only Alphonse Mucha’s grandson John is left to keep the legacy of his grandfather alive. And he does a wonderful job, together with his wife Sarah, as president of the Mucha Foundation. It is the mission of the Mucha Foundation to give Mucha’s work the best possible chance of being preserved for future generations and also to promote his work as widely as possible. The Mucha Foundation therefore actively promotes Mucha’s work through a worldwide exhibition programme, a publications programme and the Mucha Museum in Prague.

I visited the Mucha Museum in Prague, in 2007

When I traveled to Prague in 2007, the Mucha museum was nr. 1 on my “Must See” list. I found the museum hard to locate and it wasn’t nearly as big as I had expected (and hoped for). However, it is definitely worth your visit! The museum actually made me realise how versatile an artist Alphonse Mucha was. He truly mastered an incredible variety of disciplines. So, if you get the opportunity to go to Prague, please do yourself a favour and visit the Mucha Museum.