The Belle Époque was a period in French history that started in 1871 and ended in 1914, when World War I began. The period was characterized by optimism, peace in Europe, new technologies and scientific discoveries all together allowing art, and Art Nouveau in particular, to flourish. Those who were able to benefit from the prosperity of the era, the bourgeoisie, or the successful industrialists called nouveau-riches, became increasingly influenced by the habits and fads of the elite social class.

To give you an idea of the extent of this prosperity: the Eiffel Tower was built to serve as the grand entrance to the 1889 World’s Fair held in Paris. And Paris hosted another successful World’s Fair, the Exposition Universelle 1900. Cheap coal and cheap labor made it possible to grow fruits under glass which contributed to the exclusivity of the dinner parties for the upper classes. Exotic feathers and furs were more prominently featured in fashion than ever before as haute couture was invented in Paris. Restaurants such as Maxim’s achieved a new splendor and became a place for the rich to parade. In the mean time railways linked all the major cities of Europe to spa towns like Biarritz, Vichy and the French Riviera. Carriages were rigorously divided into first-class and second-class, and the super-rich even commissioned private railway coaches, as exclusivity as well as display was a hallmark of opulent luxury. 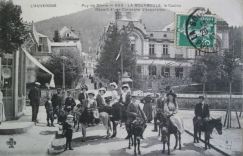 Recently, we paid a visit to a small and sleepy town in the middle of France. La Bourboule is a Spa town along the Dordogne river with the faded grandeur of the Belle Époque. If you look through your eye lashes, take away all the parked cars and other distracting elements, you can still see the pleasant bustle of ladies with umbrella’s promenading along one of the sunny boulevards.

The reason for our visit was a ramshackle bakery & tea room at Boulevard Georges-Clemenceau: Maison Rozier. The object was built in 1920 by architect Louis Jarrier. Downstairs a pastry shop slash tea room and upstairs a ballroom with a platform for an orchestra. It features a façade composed of mosaics by Alphonse Gentil and François Bourdet from Boulogne Billancourt and a loggia overlooking the boulevard. The city’s ‘Inventory of the Spa Heritage‘ states that the bakery was built in Art Deco style. The fact that it was built in 1920 would underline that, but I beg to differ… I think it is Art Nouveau. 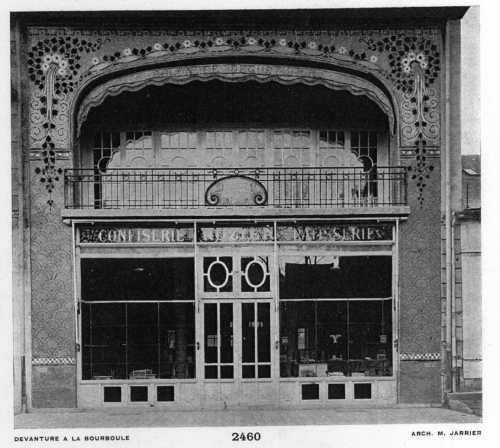 Now, even though this property was listed as a historical monument in 2001, it still looks dilapidated which I think is a shame because it is so beautiful! The dark interior of the property was difficult to see due to the fact that the doors were locked and the windows reflected the bright sunlight outside. I could however detect some original painted wallpaper (which reminded me of Japanese Cherry Blossoms), showcases in neo-Louis XVI style, ceramic wall tiles and mosaic floors. 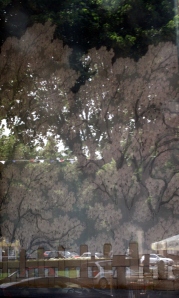 Clearly the mosaics on the facade of the object were inspired by the fact that La Bourboule is a Spa town, as the theme is water and the main color is blue.

Louis Jarrier (1862-1932) studied at the ‘Ecole des Beaux-Arts’ in Paris but returned to Clermont-Ferrand to become a well known architect in the Auvergne, and specifically in the Puy-de-Dôme region. He was actively involved in the development of spa towns like Le Mont-Dore, La Bourboule, Royat or Châtel-Guyon. The mosaics at Maison Rozier were realised by Alphonse Gentil et François Bourdet, mosaicists at Boulogne Billancourt. Jarrier also worked with these craftsmen on other projects. One example is a bridge at Quai Gambetta, also in La Bourboule. The mosaics clearly resemble the mosaics of Maison Rozier.