On the last day of 2012 we managed to buy our own original Art Nouveau family home. We had to wait four months to get the keys. But since then, as we wish to bring the house back to its original glory, we have been restoring. Day after day… 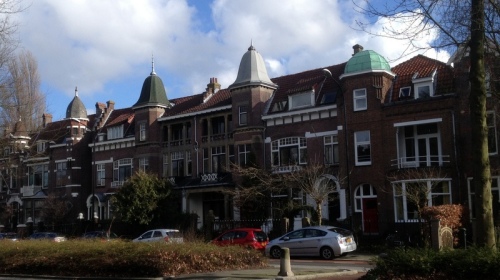 In May 2013, I wrote (here) about the projects we were facing: selecting a new kitchen, picking a new bathroom, painting doors, having the roof checked by a professional roofer, ordering solar panels, taking down dirty wallpaper, repairing the walls, removing dirty carpet, getting the lead pipes replaced and a new heating system installed etc. Many of you then asked me for a regular update. So here we go! Today, I will tell you about the restoration of the stucco ceiling in our living room.

When we bought the house, the living room had an awful 1970s ceiling: dark brown slats. We were told the old stucco ceiling was no longer there, but secretly we hope to find ‘something’. My dad – who had just retired a few months earlier – came to the rescue and together we took down the slats.

It turned out there was another ceiling hidden behind the slats: soft board. So we took that ceiling down too. And there it was… the original, yet severely damaged, 1913 stucco ceiling. The same as the ceiling in de dining room. And the same as the ceiling in our next-door neighbours living room as our house is part of a block of four; two on the left and two on the right, mirror inverted. 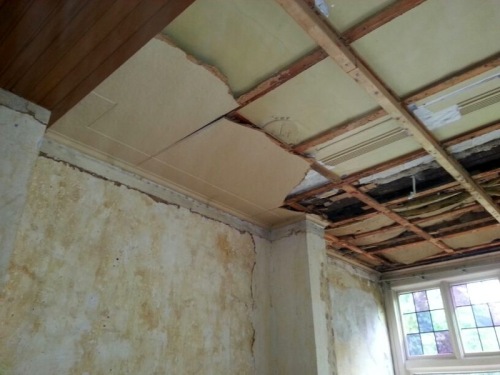 The original stucco ceiling was hidden behind two other ceilings

We searched for a plasterer who could restore the original ceiling; we found René Egas. Unfortunately, after a thorough investigation, René advised us not to restore the ceiling. It’s condition was too poor and he could not guarantee the restored ceiling would stay up very long.

Together we figured it would be best to remove the complete ceiling and recreate a new one on gypsum board. But before removing everything, René would restore one of the damaged corner ornaments and then make a mould of it. The ornaments of the hidden ceiling had much better definition than the ones in the dining room as those were painted several times over the past 100 years. The center ornament was missing.

Plasterer René Egas restoring one of the original corner ornaments

We chose René because we had faith in his capabilities. But also because he does this on a regular basis; he had a mould for the center ornament already lying around from a previous renovation project! And that made it unnecessary to create one from the center ornament in our dining room (which would have involved a risk of damaging that ceiling in the process). 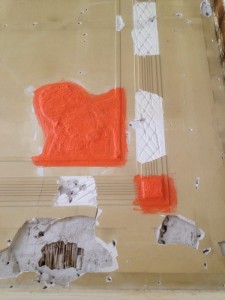 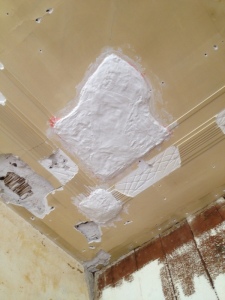 – Restored ornaments were covered with a silicone to make the moulds, and with a plaster cast to support the moulds later in the process 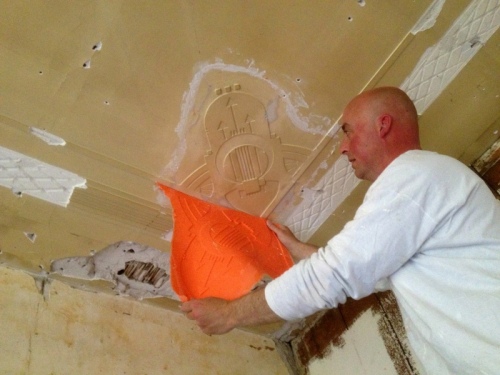 Once we were 100% sure the moulds were usable, the next challenge was to remove the damaged ceiling. Plaster, reed and battens, a mouse nest and 100 years worth of dust. My dad and I took everything down in one day. I needed another week to remove the debris. Wearing a mask was not a luxury! 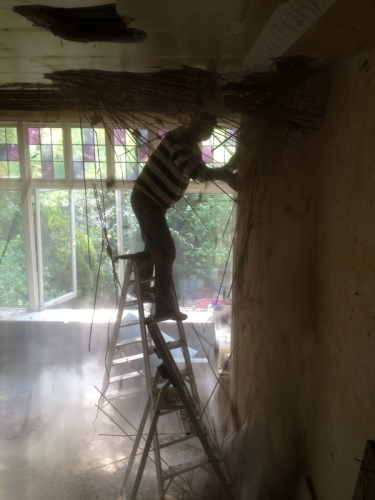 Removing the damaged ceiling was a dirty job!

We also removed the battens and the glass wool blankets from the ceiling in the veranda. They had been applied in such a sloppy way, they had no function anyway! 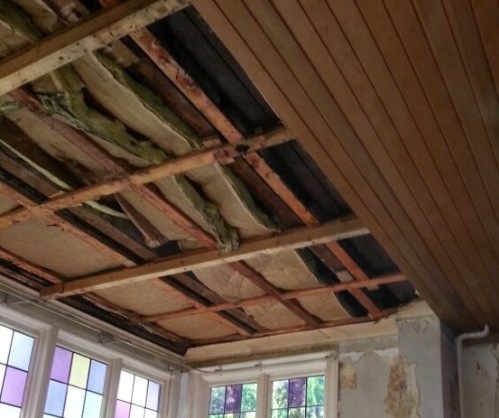 Poor insulation of the veranda ceiling

In the mean time, we studied the characteristics of the available insulation materials and decided to use thick Isover glass wool blocks to fit tightly between the beams of the veranda (leaving a few cm above the blocks for ventilation). And we sealed the whole thing off with Miofol Active foil & tape. We found this to be the only suitable moisture barrier under a flat zinc roof.

Sealing off the veranda ceiling with Miofol Active foil & tape

After that, a professional carpenter came in to create a structure for the new ceiling with an extra large number of battens, and gypsum board. We also asked him to create an artificial beam between the living room and the veranda. We had examined the original ceiling at the neighbours and as their ceiling has a beam, we wanted the beam back into our ceiling too!

Finally, plasterer René could start working on the actual stucco ceiling! We determined the exact center of the room, and ‘glued’ the center ornament at the right place. Then, the gypsum was evenly applied to the gypsum board leaving enough room for the corner ornaments to be attached later on.

Before we removed the original ceiling, René had measured the dimensions of the freeze. With those measurements he made a zinc ‘comb’ that would be needed to create the new freeze. A temporary batten was attached to the gypsum board so the comb could be pulled along this ‘rail’ through a thick layer of plaster thus creating a beautifully straight new freeze. 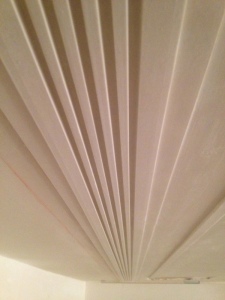 The final stage involved the application of two layers of a matt latex paint.

In the mean time, another plasterer had already restored the walls so the final result was stunning. We are só going to enjoy this ceiling for the next 100 years! 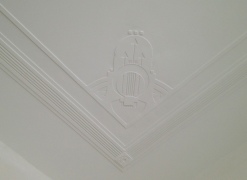 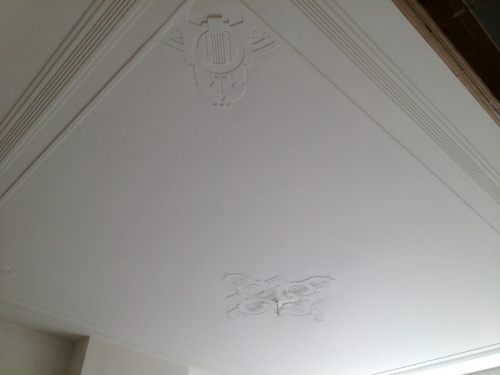 12 thoughts on “Renovating our Stucco Ceiling”