The first topic today was The Eye of an Era: Art Nouveau Interpretations of the Feminine. And again, all papers presented on this topic can be downloaded.

I hope Elizabeth’s paper or her slide show will be available soon as she had quite some interesting pictures for us. Pictures that illustrated the way men perceived women back in the 1900s. Pictures that didn’t paint a pretty picture if you’ld ask me! The women in the pictures were all hybrids, half woman half animal. And of course it’s nice to be compared with a lovely fawn. But it’s a whole other ballgame if you are depicted as a vampire bat, a rat or a fat turkey. Of course the men in the pictures were all dressed as hunters, and they all carried a gun… Interesting story!

During my lunchbreak, I took the guided tour of the Casa Milá, or as it is called by the locals, La Pedrera, which means the Quarry. We had an excellent guide, Sílvia Vilarroya, who is actually the curator of the permanent exhibition at Casa Milá. You will understand that I took hundreds of pictures, much more than I could possibly share with you today, but I have tried to narrow it down to a nice selection. 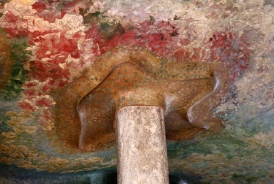 Construction of the roof of Casa Milá

Construction of the roof of Casa Milá

Now for those of you who don’t know this, there is one apartment on the 4th floor that is open for visitors. The apartment is decorated and furnished the way homes of the bourgeoise in Barcelona commonly were in the early 20th century. 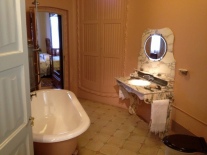 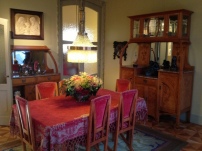 The Pedrera Apartment Side Table

In the afternoon, the congress continued with a second topic Research and Doctoral Theses in Progress. The papers can be downloaded here.

With architecture being my favourite Art Nouveau subject, I was most excited about these papers:

I wish I had also been able to hear the presentation of Lilla Zámbó (“Patrimonialisation” of Hungarian Art Nouveau Architecture in the Carpathian Basin through the example of Budapest, Bratislava, Târgu Mureş and Subotica), but the congress ran over by at least half an hour and some of us had to race to Palau Güell for our 7 pm guided tour.

Palau Güell was one of the first important commissions Antoni Gaudí received at the start of his career. Eusebi Güell (industrialist, politician and patron of arts) wanted Gaudí to build him an urban palace. And so he did… 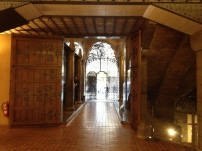 From my modest selection of photos you can see that this is still an early work as Gaudí has not yet developed his own unique style. The Palau Güell could easily have been a mediaeval castle. However, the selected materials, the parabolic shapes and the ventilation shafts on the roof are signs that Gaudí’s creativity was at this stage already moving into the direction that would eventually make him immortal.

As if this wasn’t enough for one day yet, we were also invited to a Jazz concert on the rooftop of La Pedrera. Now who can resist a balmy night on top of the La Pedrera, listening to the Benjamin Herman Trio with a nice glass of Cava? I had a lovely evening.

After this trip I have produced a 2018 Calendar with some of my photo’s of Gaudí’s beautiful architecture. You can see, and order my calendar when you click here.