Do you remember I went to Leeuwarden last year? Today, it’s exactly one year ago that I wrote about the ‘exotic’ Centraal Apotheek. And guess what…. Leeuwarden has more!

In 1634, Abbe Freerks Gabbema commissioned the construction of an almshouse for 12 elderly women. The accommodation was built in the kitchen garden of the Jacobin monastery, behind the Jacobin Church in Leeuwarden. Due to his financial predicament though, Gabbema didn’t leave the elderly women with any funds. His daughter Walkje corrected this in her last will; and she arranged for the custodians of the ‘Old Burger Weeshuis’ (the local orphanage) to manage those funds.

By 1905, the little houses had become dilapidated beyond repair, and the custodians decided to build a new accommodation for the needy old ladies. They obtained a plot of land along the Wybrand de Geeststraat, asked Willem Cornelis de Groot (1853-1939), who designed many characteristic houses in Leeuwarden, to design the new premises and commissioned Coenraad Lerk to take care of its construction.

In April 1906 the drawings were ready. And by the end of December, that very same year, the elderly women moved to their new accommodation. Building costs were around fl. 30.000 (including plot and other costs fl. 45.000), the price of a new Volkswagen Polo today. 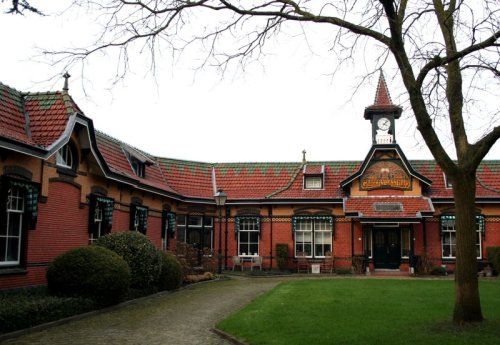 And the decorating doesn’t stop there. Above the entrance we encounter a rather symbolic Art Nouveau tile panel. An eagle (representing the almshouse) offers a rabbit as food to the owls and crows (the residents) and spreads its wings over them protectively. The tile panel was painted by Klaas Wits, and produced by Koninklijke Fabriek van Muurtegels (Royal Tile Factory) Jan van Hulst, in Harlingen.

The timepiece in the belfry (which is covered with red glazed ceramic slates) is not original as De Groot drew a bell in the tower. Yet a Ø 32 cm bell was discovered in the attic of the building. Made by P. Seest in 1762, it probably originates from the first Gabbema Gasthuis.

The almshouse was designed according to a typical U-shaped ground-plan, with a small garden in the middle; around the garden an elegant wrought iron art nouveau fence completes the fairytale.

Can you believe in the 1970s demolition of this charming building was actually considered? Fortunately, demonstrations prevented the destruction. The property was renovated and divided into rental apartments. And in 1983 the Gabbema Gasthuis rightfully became a listed monument (RM24482).