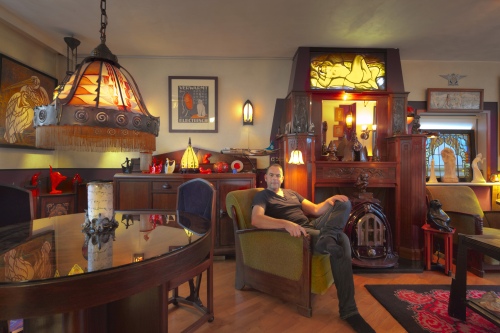 More than a year ago, I stumbled upon a YouTube video on Twitter. The curator of the Stedelijk Museum in Amsterdam, Ingeborg de Roode, asked viewers to submit photos of their Amsterdam School furniture. I have an Amsterdam School mirror! I realised, and sent her my pictures. I got a reply back thanking me for my contribution. My mirror was not selected for the exhibition, but all contributions, De Roode assured, were considered valuable in the investigation.

Let me explain the Amsterdam School movement. According to the leaflet handed out during the exhibition The Amsterdam School was an exuberant style of architecture and design that was unique to The Netherlands. The movement emerged after the New Art and Art Nouveau schools, and is regarded as the highly original Dutch correlative to the lively international Art Deco movement. 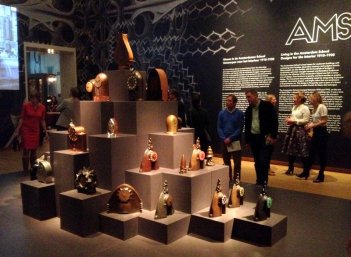 But please beware that the Amsterdam School was not a weak adaptation of either the Art Nouveau or the Art Deco movement, nor an undefined style between those two very distinct styles. The Amsterdam School was a very powerful architecture and design movement. And in a way, this places The Netherlands in a unique position; it is the only country in the world that had a full-blown design movement between Art Nouveau and Art Deco. 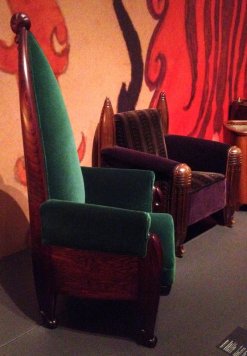 Having said all that, I think it’s justifiable to write a post about the Amsterdam School exhibition on my blog About Art Nouveau.

In 1912, Amsterdam architects Joan van der Mey, Michel de Klerk and Piet Kramer designed an office building for six shipping companies. Shortly after the inauguration of this Scheepvaarthuis in 1916 (exactly 100 years ago this year) fellow architect Jan Gratama coined the term Amsterdam School when he described the shippinghouse.

At  the moment, the Scheepvaarthuis houses the Grand Hotel Amrâth Amsterdam. So you could book a room or get married there while enjoying its luscious architecture. But the hotel organises guided tours too. You can get more information about that here. In the mean time, I’ve gathered some photo’s of the Scheepvaarthuis for you on here.

Another well-known Amsterdam School building is the Tuschinski Theatre. I have collected some more pictures for you here.

Stylistic Features of The Amsterdam School

According to the exhibition leaflet, the movement’s four key traits are:

For those who know a little about Art Nouveau, this all sounds familiar, right? 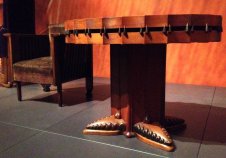 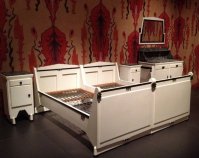 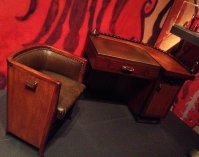 The exhibition reveals how the colourful, expressive style influenced our interiors. It includes furniture, clocks, textiles, posters, book covers, lamps and jewellery. I won’t go into detail as I think the pictures speak for themselves. Please enjoy the pictures, or better yet, go visit the exhibition. 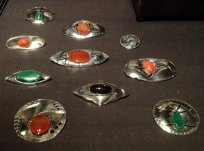 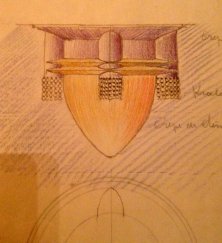 There’s one aspect of the exhibition I’d like to highlight though: the workshop. In one of the galleries you can actually make your own Amsterdam School clock from pre-cut cardboard and decorate it. If you buy a clock movement from the museum shop, you’ll have a self-made working Amsterdam School timepiece!

The exhibition was shrouded in darkness, just the way I like my exhibitions. Disastrous for my photo’s though, so please forgive me to poor quality of my pictures. If you buy the catalogue, you’ll be able to enjoy high quality pictures of all exhibited objects and só much more!

Do you see how these leaded stained-glass windows were inspired by the works of Ernst Haeckel? In an earlier post I wrote about how Ernst Haeckel inspired many Art Nouveau artists around the world.

And do you agree with me that these graphic designs appear much more related to Art Nouveau than to Art Deco? Please let me have your thoughts in the comments below.

This shows how dark it was!

The exhibition catalogue is a comprehensive survey of a 10 year investigation by curator Ingeborg de Roode, art historian Marjan Groot and many, many interns. It’s already available in bookstores, in Dutch as well as in English. 304 pages in full colour. All new photo’s. 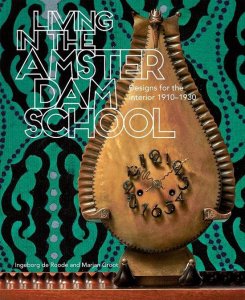 Also, there’s a brochure available about 100 years Amsterdam School, including an overview and a map of Amsterdam with highlights to visit. Download it here.

30 thoughts on “Living in the Amsterdam School”