Until the end of this month (29 May 2016), the Gemeentemuseum in The Hague is presenting a large exhibition about Johannes Theodorus ‘Jan’ Toorop. Around 1900 Toorop was, together with Van Gogh and Mondriaan, one of the most important Dutch painters. And not only was he an excellent painter himself, he is also said to have inspired other great painters, like Gustav Klimt!

1902 Jan Toorop in his studio in Katwijk

Now, I’m not going to bother you with a biography as enough about his life has already been written. But if you’d like to read about Toorop’s life anyway, I strongly recommend you click on the links below, in the Read more section.

We all know Toorop for his famous 1894 poster for the Delftsche Slaolie (Delft Salad Oil), right? But he did só much more! At the exhibition, what struck me most was Toorop’s versatility. And you would expect a versatile artist to work in phases, wouldn’t you? Not Toorop! He worked like a chameleon constantly changing styles… 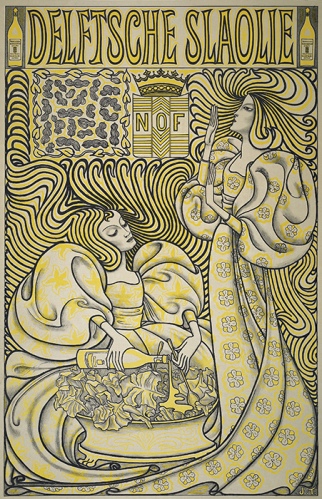 If you browse Toorop’s chronologically ordered works on this website, it becomes even clearer that Toorop didn’t work in phases. He worked in styles and shifted back and forth between those styles like a 16-year old girl changes outfits on a friday night. Toorop worked in Realism, Impressionism, Symbolism, Art Nouveau, Pointillism and Catholic Symbolism. And in between he made a vast number of portraits ranging from very realistic to impressionistic.

Having seen the entire exhibition, I find it hard to say “I love Toorop’s work”. I would rather say I am impressed by his work. I am impressed by his talent and his versatility. I don’t dislike what he did. I just didn’t go crazy about it. Didn’t go crazy about Henry van de Velde’s pointillist works at the Fin-de-Siècle Museum either. Unlike most works by Egon Schiele and James Ensor at that exhibition… I genuinely disliked those. That is just not my cup of tea.

To give you an impression of Toorop’s versatility here are some examples of his work: 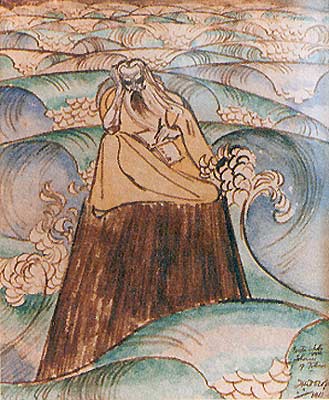 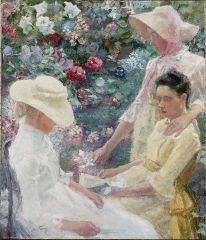 I did like Toorop’s Art Nouveau work, most of which actually qualifies as symbolism at the same time. And from 1894 Toorop threw himself at the decorative arts too. He produced book covers, tile panels, stained glass windows, posters, mirrors etc… 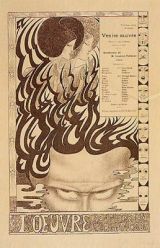 I recall a funny story from my visit to the Louis Couperus Museum last year: Toorop designed the book cover of Couperus’ book Metamorfoze and that turned out to be a great success. When Toorop was asked to design the cover of Couperus’ next book Psyche, Couperus wrote to his publisher “Frankly, I find Metamorfoze better, both drawing and color (black and white). Toorop disappointed me this time.” And about Toorop’s design for Babel he said “This is what he does. It is nice, no more than that”. Today, however, book covers by Toorop are regarded as the highlight of Dutch book ornamentation and especially the Couperus covers are sought after collectibles.

So… if you haven’t seen the Jan Toorop exhibition yet, head to The Hague before the end of May 2016. This is a unique opportunity as the guest curator of this exhibition, Gerard van Wezel, has spent the last thirty years conducting in-depth research on Toorop’s oeuvre. His involvement has enabled the Gemeentemuseum to gather all of Jan Toorop’s principal masterpieces in the first complete overview of his work ever to be presented in the Netherlands.

A book published about the exhibition can be ordered by clicking here.
There seems to be only a Dutch version of the book…