Being a member of the Réseau Art Nouveau Network (RANN) I received an invitation for the inauguration exhibition of the new CIVA Foundation in Brussels. The CIVA is an impressive architectural complex including a library, archives and documentation center, exhibition halls and conference rooms. Main objectives of the CIVA are knowledge, discussion and exchange, through exhibitions, publications (exhibition catalogs, beautiful books, architectural guides etc.) and seminars and conferences. 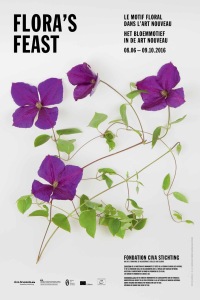 The inauguration of the new CIVA Foundation was celebrated with the opening of the exhibition Flora’s Feast – The Floral Pattern in Art Nouveau.

As the weather forecast predicted heavy showers around the time of the opening ceremony, I decided to arrive early. And that turned out to be an excellent decision, because I ran into the Guy Conde-Reis, the curator of the exhibition. And Guy offered to give me a private tour of the exhibition!

Flowers have been a popular subject since antiquity. Nothing new there. Flora’s Feast explains how the way they were being perceived and depicted changed during the 19th century. Until the 19th century, the Western world was dominated by a dualism that put Culture opposite Nature. Culture (read: humans) needed to restrain Nature, stylize it in symbols and metaphors. Japan didn’t know such dualism. In Japan Nature was represented in all its genuine facets: beautiful flowers, dead leaves, twisted trunks etc… Japan’s original religion Shintoïsm regards humans as part of nature. 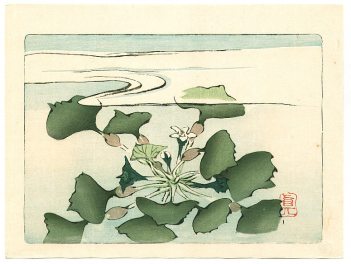 While Western artists idealized flowers for centuries, seeking the perfect flower, Japanese artists accepted each flower as it really was: crooked, bent or withered. They focussed on the uniqueness of reality.

When Commodore Perry forced Japan’s Shogun Tokugawa Ieyoshi in 1854 to sign the Convention of Kanagawa, a US-Japan trade treaty, he ended Japan’s 200 year seclusion. Shiploads of Japanese artefacts were transported to Europe. And less than 50 years later, during the 1900 Universal Exhibition in Paris, Japonism was already at its zenith.

Art Nouveau artists discovered this new source of inspiration. Nature, and flowers in particular, became their centre of attention once more. And only because they learned to accept nature as it was – ethereal, imperfect and fragile – they could, however paradoxical, show its true vibrant spirit.

The exhibition is named after Walter Crane‘s book Flora’s Feast. A Masque of Flowers, published in 1889 by Cassell & Company. It was the last of a series of 16 albums exhibited in 1891 at Les XX. Crane’s flowers girls and arabesques clearly announced that Art Nouveau was awakening.

Having a winter garden or a glass house was extremely popular during the last decades of the 19th century. It granted collectors of exotic plants, such as orchids, the possibility to flaunt their wealth. Modern materials used to build the conservatories (mostly cast iron and stained- or leaded glass panels) and the priceless exotic plants collected inside the conservatories guaranteed their owners a prominent position in the upper class. The orchid motif therefore became omnipresent in Art Nouveau.

A well-known designer who used the orchid in his creations was Philippe Wolfers. Wolfers created beautiful jewellery, silver ware and cache-pots with orchid designs. But the exhibition not only shows orchids applied in decorative arts; there are also spectacular paintings by Alphonse Goossens on display! 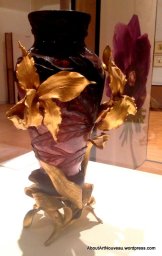 Art Nouveau architects seeked a symbiosis between humans and their surroundings. Horta, Mackintosh, Hankar, Guimard, Wagner, Gaudí, Van de Velde… they all designed Total Works of Art, or so-called Gesamtkunstwerk, with flowers adorning the facade of the building, as well as the crockery, the silver ware, the furniture, the wallpaper and so on… There are plenty of excellent examples in this exhibition showing how the floral pattern was applied in Art Nouveau architecture. 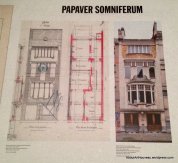 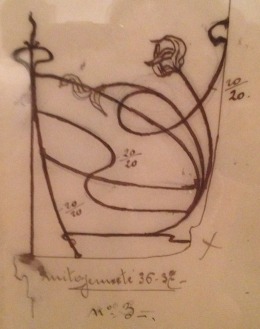 And the exhibition has lots and lots more than I can show you here! So… I strongly recommend you visit the exhibition in Brussels while you can. It lasts until 9 October 2016. Access is free of charge.

I would also like to encourage you to look upwards more often when you walk past an Art Nouveau building so you can take in the floral elegance the architect added… just to surround you with nature’s beauty. 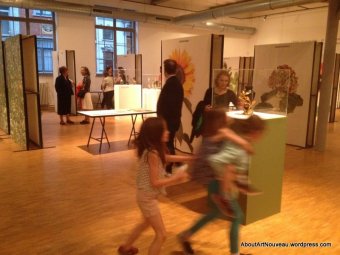 Examples of how flora was used for interior design

After having been gone for three years, the Art Deco Fair in The Hague is back! (14-16 feb 2020) Art Deco? I can hear you ask. Yes. Though this fair actually features (applied) art from 1880 to 1980, the bulk of it is Art Nouveau, Amsterdam School and Art Deco. To read my review and see more photos —> visit my blog (Link in Bio). #jugendstil #interieur #interiordesign #interiordecorating #perioddecor #artnouveaustyle #jugendstildesign #design #artdeco #amsterdamschool #museumhetschip #hetscheepvaarthuis #artdeco20 #artdecobeurs20 #artdecobeurs #artdecobeursdenhaag #VVNK #nieuwekunst #artnouveau #wordpressblogger #maisonartnouveau
%d bloggers like this: