Over the years, BRAFA has established itself as one of Europe’s unmissable cultural events in January. For its next edition, which will take place between 21 and 29 January 2017, it will bring together 132 galleries and art dealers from 16 countries. Archaeology, jewellery, paintings, sculptures, furniture, books, design, ceramics, porcelain, clocks, objets d’art, glassware, antique frames, original cartoon plates and other contemporary creations will retrace more than four millennia of art history from across the continents.

When I’m traveling I love to visit antique shops. The ones with antique jewellery in particular! And it’s not because I want to possess all that shimmers, it’s rather because those shops serve as a time warp to that exhilarating time and place we call La Belle Epoque! Oh, how I love to fantasize about life in Paris, back in 1900… 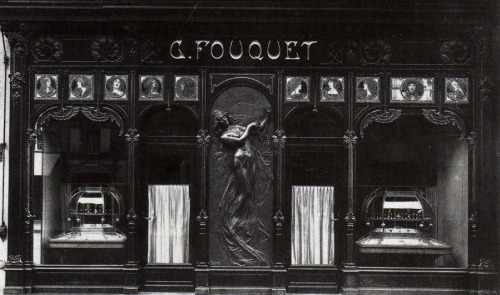 During the period 1899-1901, Fouquet worked in close collaboration with Alphonse Mucha (1860-1939). At a time where the emphasis in fine jewellery had been on creating dramatic settings for diamonds, Fouquet and Mucha redefined fine jewelry design, embracing the belief that the beauty of a jewel depends on its artistic conception. Materials were chosen for their contribution to the overall design, not for their intrinsic value.  So instead of focussing on diamonds, they started working with enamel, glass and horn combined with for instance garnets, moonstone and opals.

Mucha produced a spectacular series of jewellery designs to be executed by Fouquet in his Paris atelier. They would be the centerpiece of Fouquet’s display at the 1900 Exposition Universelle in Paris, for which Fouquet was awarded a gold medal. 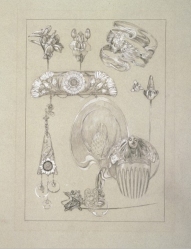 Fouquet and Mucha executed many important commissions, such as the famous Snake bracelet Sarah Bernhardt wore in Médée in 1899.

When Fouquet decided to move his boutique to the luxurious Rue Royale, he called on Mucha to design his shop, both exterior and interior, as well as the furniture, light fittings and showcases. 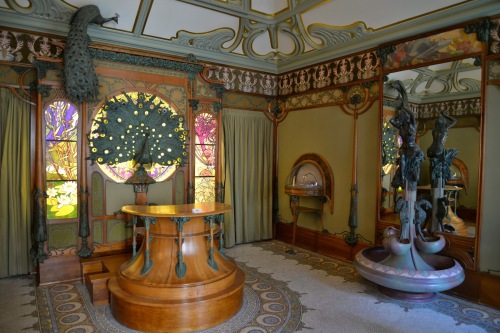 Mucha envisioned the shop as a complete work of art, which would provide a harmonious environment for Fouquet’s jewellery. He drew inspiration from the natural world, and pride of place was given to two spectacular peacocks set against glowing designs in stained glass. The shop opened in 1901 and was an immediate success.

Mucha’s designs remained in place until 1923 when they were replaced by more up-to-date fittings. In 1941 Fouquet donated each piece of Mucha’s revolutionary design to the Musée Carnavalet for safekeeping. In 1989 the Musée Carnavalet completed the painstaking job of reconstructing the boutique. It remains one of the most spectacular examples of Art Nouveau decorative design.

And now, Epoque Fine Jewels is bringing one of these very rare jewels to the BRAFA 2017 for us to marvel about: a ‘chaîne de corsage’ necklace designed by Alphonse Mucha and executed by Georges Fouquet. The chaîne de corsage is composed of eleven sections, each unique and set with various gemstones (including ruby, sapphire and emerald, baroque natural pearls and diamonds) between geometric motifs decorated with plique-à-jour enamel. The chain ends with two pendants of foliate design highlighted with plique-à-jour, translucent enamel and baroque natural pearls, all mounted in 18ct gold. The length of this chain is a staggering 130 cm as the necklace would be worn around the shoulders. You can see how that works in several of Mucha’s drawings, like this one from his Documents Décoratifs.

BRAFA is one of the world’s oldest and most prestigious art fairs where all art works are for sale. Quality and authenticity are key requirements and therefore satisfaction is guaranteed. If you would like to know what else the BRAFA has to offer Art Nouveau lovers, I recommend you read my blog about last year’s edition here. This really is the Art Fair to look forward to.

You can WIN two tickets for the BRAFA in a competition by 1. Liking the About Art Nouveau Facebook-page and 2. Sharing the message about the Art Fair.