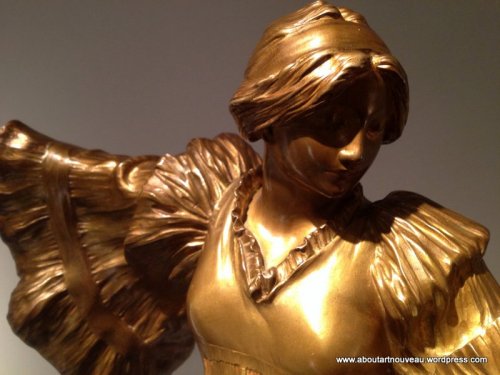 More of the same is not necessarily a bad thing…

Every January BRAFA relaunches the art year with renewed fervour, continuing a tradition that dates back to 1956. The fair has become an unmissable event, attended last year by over 60.000 art enthusiast from Belgium and beyond. BRAFA is devoted to the ideals that made it great, with each year’s focus on quality without compromise, elegance without pretension and a warm Belgian hospitality that makes visitors feel so welcome. That is how the art fair is promoted in the brochure. And honestly, it’s the absolute truth. Like every year, I had a wonderful day filled with astonishing art!

Of course I went to see my favorite galeries first: Gallery Lancz, Cento Anni, Epoque Fine Jewels, Alexis Bordes, Ary Jan, the CLAM and Univers du Bronze. They all lived up to their impeccable reputation. But I discovered some unexpected exhibits too! So let me talk you through my exciting new discoveries…

The King Baudouin Foundation puts great effort into conserving and protecting Belgium’s heritage. Through its Heritage Fund, the Foundation acquires masterpieces, promotes them and makes them accessible to the general public. And one of the collections that I have been waiting for getting unlocked is the Roberto Pozzo Collection. I have known about this collection for a few years, but never could find out whether it was put on display yet, or not. Roberto Pozzo started collecting Art Nouveau tiles from various flea markets in Brussels. Today, his collection boasts over 9,000 tiles. In order to ensure the preservation of his collection and to make the tiles accessible to the general public, Roberto Pozzo has donated his tiles to the King Baudouin Foundation. At the BRAFA, I learned that this amazing collection is kept close to the very place where a large part of it was created, at the Gilliot & Roelants Tile Museum in Hemiksem. And since this small museum is only open by appointment, the King Bauduin Foundation has found Mario Baeck (the expert on Belgian ceramic tiles) willing to help catalogue the entire collection and make it accessible online: www.pozzo.collectionkbf.be 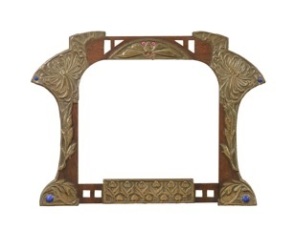 I am intrigued by late 19th and early 20th century European painting. Over the years I have come to understand there is no such thing as an ‘Art Nouveau movement’ in painting, with the characteristics of Art Nouveau: asymmetry, flowing serpentine lines and organic shapes. Instead, the paintings are often described in terms of their relation to other movements such as Symbolism, Orientalism and Japonism. 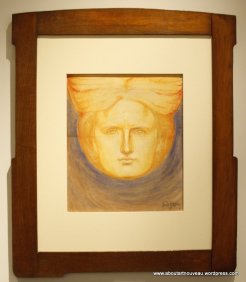 Many well-known painters like Vincent van Gogh, Paul Gauguin, Gustav Klimt, Claude Monet and James McNeill Whistler were influenced by Japanese art. But what has fascinated me for quite some time is the fact that European art influenced Japanese artists as well. We never hear about that though. Philippe Heim is now showing a beautiful example of this phenomenon at the BRAFA: a painting by Shigeru called Vue de la Grande Muraille de Chine depuis Badaling.

During the Meiji period (1868-1912), Japan underwent a tremendous political and social change in the course of the Europeanization and modernization campaign organized by the Meiji government. Western-style painting (yōga) was officially promoted by the government, who sent promising young artists abroad for studies, and who hired foreign artists to come to Japan to establish an art curriculum at Japanese schools. During the Taishō period (1912-1926), after long stays in Europe, many artists returned to Japan bringing with them the techniques of impressionism and early Post-Impressionism. One of the painters of the yōga movement was Shigeru Aoki (1882-1911), but it’s unclear if this particular painting is one of his as the card only stated ‘Shigeru’ without further detail.

While the BRAFA 2016 showed a striking number of works by James Ensor, and the 2017 edition seemed to exhibit a disproportional number of works by Lucien Lévy Dhurmer, the current exposition showed a notable increase in the number of works by Emile Claus. Interesting how a different artist pops up every year! The above 1901 painting caught my attention because, first of all, I love capucine flowers for their beautiful ‘Mucha’ colours, and second, because it reminded me of a 1893 painting by Jacobus van Looy. That painting – called The Garden – was on display last year at the Gemeentemuseum The Hague and can now be seen at the website of the Teylers Museum. Was Emile Claus inspired by Jacobus van Looy? 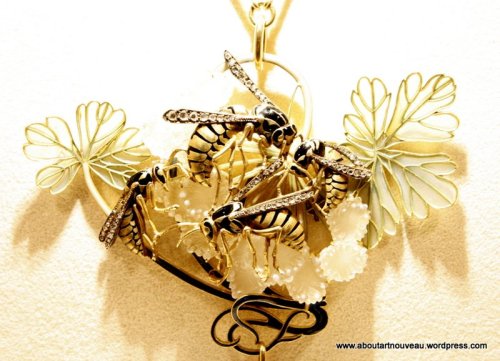 Chamarande was established in 1972 by François d’Ansembourg. His son Frédéric took over in 2004, focusing on antique jewellery from the second half of the 19th century to the 1950s. And although I am a huge fan of Epoque Fine Jewels, Chamarande has now demonstrated to have a great collection as well. They carried a large selection of Lalique and Fouquet pieces to the BRAFA. A selection to drool over. Please excuse the abominable quality of my photo’s. I did the best I could considering the lack of light… 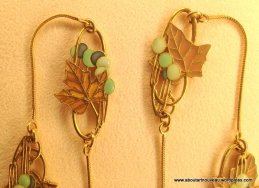 So, this was a again an impressive BRAFA Art Fair. I hope I have been able to give you an insight into what is currently the best of the best at the market in terms of Art Nouveau. If you are going to visit the BRAFA this week, keep an eye open for my favourite art dealers, but check out these ‘new’ ones as well!