Honestly, I have been procrastinating to write about this exhibition for months as I couldn’t figure out where to start. There is just só much to tell…

When I visited Art Nouveau in The Netherlands in May for the first time, I was completely overwhelmed. I remember returning home exhausted from all the impressions and my attempt to take it all in and photograph everything at the same time. It was simply too much! So, last week I went back to The Hague to see the exhibition again, and give it one more try. 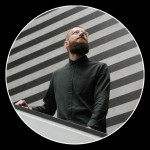 One thing that I can say about the exhibition without a shadow of a doubt though, was that the narrative gallery text by curator Jan de Bruijn was excellent. I have visited many exhibitions at the Gemeentemuseum in The Hague, and this was by far the best text. Jan also wrote the catalogue for this exhibition, a new standard work on Dutch Art Nouveau. The book includes hundreds of new photos and an English summary of 31 pages.

As Art Nouveau covers such a wide range of disciplines, one can imagine the endless possibilities Jan faced when he had to decide how to approach the exhibition. He chose to tell the story of Dutch Art Nouveau by focussing less on the individual objects and more on the art and design culture at the time. Which is wonderful, as this approach sketches a very broad picture of the era. And I love getting the facts presented in the right perspective. To create a bit of a framework, Art Nouveau in The Netherlands is explained along the following 3 thematic strands:

Back to (Dutch) Nature

At the same pace as industrialisation and massive urbanisation, a fascination with nature developed. People believed they would encounter unspoiled culture in the countryside, as well as the perfection of Mother Nature. According to Jan, that growing appreciation of nature can also be linked to increasing prosperity and the fact that a larger proportion of the population had ‘free time’. Heaps of magazines, associations, plant guides and walking guides emerged spreading knowledge and the love of nature.

Designers and artists also developed a fascination with nature. Inspired by the English Arts & Crafts movement, an entire generation began to study plants and animals in detail. The exhibition includes lots of printed material to give us an idea of how comprehensive that study of nature actually was. And many of those objects are borrowed from my friend and fellow-blogger Sipke van de Peppel, who has been collecting and writing about graphic Art Nouveau for many years. Check out Sipke’s Dutch blog at Anno1900.nl or his English website at Dutchbookdesign.com. 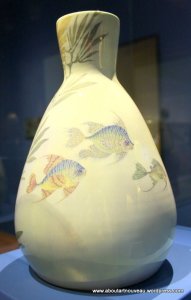 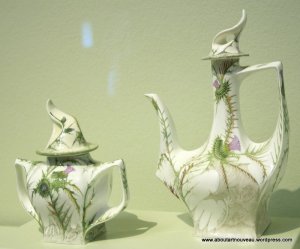 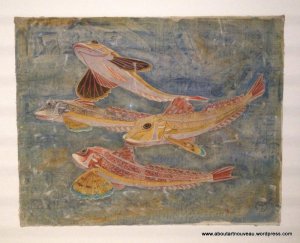 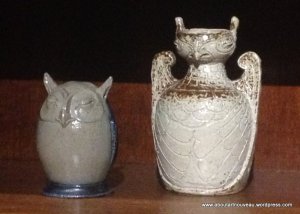 The Theory of Ornament

Following the disappointing outcome of the Great Exhibition of the Works of Industry of All Nations at Chrystal Palace (Londen) in 1851, and the Exhibition of Art Applied to Industry at Paleis voor Volksvlijt (Amsterdam) in 1877, art education became a state matter and new design courses were established around 1880. The study of plants and animals was an important element of the theory of ornamentation as taught at these schools. For the first time, people were actually trained to become ‘designers’.

Although the Dutch looked to their German and British neighbours for ways to improve standards in art education, they were much more dogmatic and resolute than those neighbours. The basic principle behind the theory of ornament was, that any decoration on a flat surface should be flat, and not pretend to be 3-dimensional. How to create such a 2-dimenional ornament? Well, by using basic geometric shapes, and by stylising and simplifying natural motifs. And a designer should at all times use an underlying geometrical format (a matrix) as an aid. 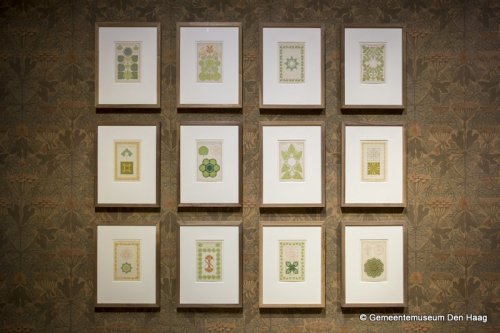 These principles were derived partly from the theosophical ideas that had a great influence on Dutch designers and artists at the time. It is a bit complicated to explain the theosophical theory here and now, but basically the theosophical conviction was that the cosmos is founded on geometric principles. Therefore natural forms had to be simplified, stylised and arranged on an underlying pattern. And there are lots of beautiful examples of this practice in the exhibition, as well as examples of the educational material that was used at the new art schools. 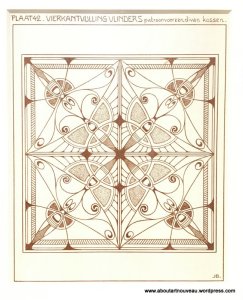 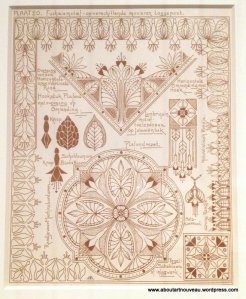 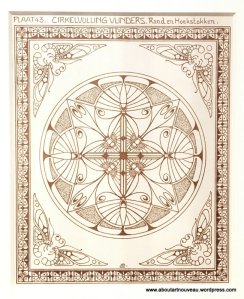 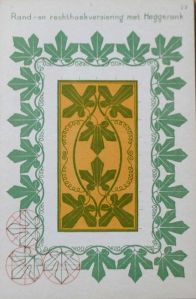 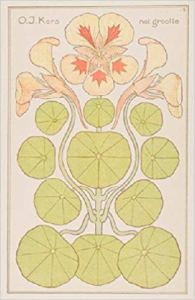 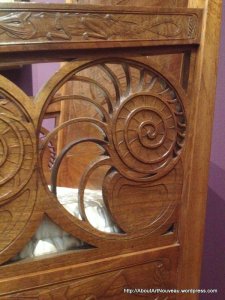 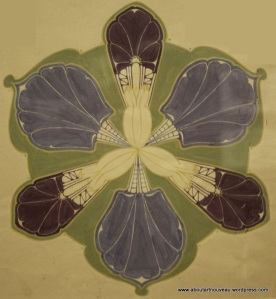 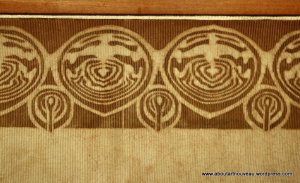 Dreaming of the Orient

The Amsterdam Zoo and Ethnographic Museum were founded in 1838 by the Royal Zoological Society ‘Natura Artis Magistra’. The Society focused on science in general and on a presentation of the Dutch colonial territories in particular. Therefore, not only live exotic animals were collected, but also many other zoological material (skeletons and preparations), minerals and ethnographic objects. And it was at this display of ethnographic objects that young art student Lion Cachet discovered the batik technique and started experimenting with it.

Soon after Lion Cachet, his friend Gerrit Willem Dijsselhof also became fascinated by the possibilities batik offered. Dijsselhof had actually been seeking a medium to use paintings as decorative panels as opposed to autonomous artworks, and batik seemed to be the answer. Dijsselhof was trained as a painter, and – just like Henri van de Velde – he became one of the first artists to abolish the distinction between fine art and applied art. Quite remarkable at the time.

The highlight of his career was positively the room he designed for Amsterdam dermatologist Willem van Hoorn. With its huge decorative panels, stylized 2-dimensional depictions of animals and plants, created with a technique from the Dutch East Indies, the Dijsselhof Room really is a highlight of Dutch New Art.

Not much later, other Dutch designers started working with batik. Thorn Prikker, Agathe Wegerif, Chris Lebeau and his student Bertha Bake are the best known. But there were many more. Batik was firmly established within a few years. The technique was ideal for creating the flat ornamentation that was so popular at the time. These artists however, used Javanese batik technique purely for it aesthetic qualities and the artistic potential it offered; they were not al all interested in its ethnographic origins.

At the same time though, there were also people who were keen on authentic ‘crafts’ from the Dutch East Indies and other colonies. They highly appreciated the primitive, unspoiled culture from the Near and Far East territories as those had not yet been spoiled by a modern industrial society. On top of that, these Oriental civilizations also offered a completely new visual idiom. The 1883 International Colonial and Export Exhibition at Amsterdam was a turning point in the appreciation of Persian, British East Indies and Japanese art and ornamentation. 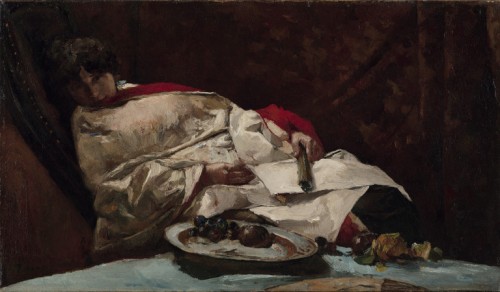 And while the Dutch had been the only ones allowed to maintain relations with Japan in the past, the outbreak of ‘Japonism’ came rather late in The Netherlands. Only at the end of the 19th century this fashionable trend infected the Dutch too. Breitner  and De Zwart painted their girls in kimono and Eisenloeffel based his designs for teapots on Japanese sake kettles. And to have some Japanese works became a sign of good taste.

The best example of the impact from the Orient is without a doubt the decorative ceramics produced by the Rozenburg pottery in The Hague. Pottery painters were taking evening classes at the Hague Academy, which had Japanese books in its library as well as copies of Siegfried Bing‘s well known magazine Le Japon Artistique. In 1900, Rozenburg presented its eggshell porcelain at the World’s Fair in Paris and that was a huge success!

The Japanese influence can been seen everywhere in Dutch Art Nouveau, particularly on flat surfaces: asymmetrical, stylised natural motifs, with no shading or perspective. 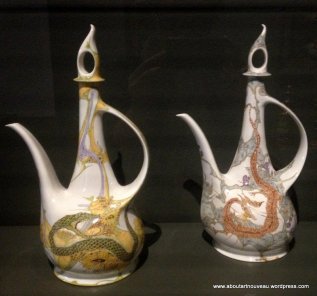 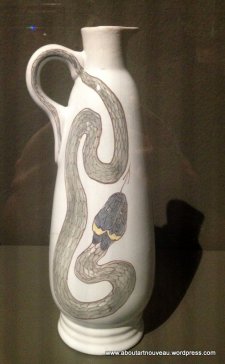 Besides focussing on the 3 main subjects, of course the exhibition was also just a feast for the eyes in any other possible way. I have tried to capture as many galleries as possible for those who cannot make ik to The Hague. But if you have the opportunity to visit the Gemeentemuseum before the 28th of October 2018, please do visit the exhibition and let me know what you think in the comments below!

And here is a nice video from the museum, showing the preparations in April.

The book about this exhibition can be regarded as the new standard work about Dutch Art Nouveau. If you click on the picture, you will be referred to an online bookstore where you can purchase the book online.

Interesting interview (in Dutch) with curator Jan de Bruijn about the exhibition:

2 thoughts on “Art Nouveau in The Netherlands”