In September, I learned through Social Media that H&M was planning on launching a Fall Collection with famous prints from William Morris’ legacy. My initial reaction was “they will probably only launch in the UK, bad luck for me. Maybe I should try to order something online from the UK…”.

Yes, I admit, I wanted something from that Fall Collection myself. I went searching for more information online… What outfits would they be launching? Blouses, shirts, dresses, skirts? Will they include my size (being 1,80m tall)? Any accessories worth having maybe? Anything from this collection would – for sure – become a collector’s item, and I wanted my share of it!

On Social Media, people went crazy a few days before launching. Everyone outside the UK was asking the same question: will H&M sell this collection in my country too? A quick look at the international H&M website confirmed they would. My Twitter-timeline exploded for a brief moment. And particularly in Facebook groups like The William Morris Appreciation Society, there was a lot of discussion going on. Everywhere around the world, on the 4th of October 2018, the Morris Collection would lauch at H&M!

Here are just a few examples of what was happening on Social Media:

The @hm x Morris & Co. is the most beautiful collection of floral deliciousness I have ever laid eyes on – it’s going to take all of my money😍

The H&M and William Morris collaboration is my absolute dream come true… Beautiful AND useful AND affordable! It's what WM would have wanted! CLOTHES SOCIALISM!

And on that 4th of October posts started popping-up from A. happy people showing off their purchases and B. disappointed people, because H&M stores were already sold out by noon. Even online, many items were sold out in no time! Imagine, a worldwide lauch on October the 4th (which must have been a major operation for H&M to coordinate) sold out within hours… !!! What an incredible success! Which shows that William Morris and his designs are still very much alive and kicking!

@hm_custserv 日本: How long do you usually restock the H&M Japanese online store? I’m interested in the new William Morris collection very much but they sold out so quickly within less than 24 hours, and I can’t track one of the items whether it’s available in the physical store.

William Morris x H&M Collection is even nicer in person, so next time you see me I’ll be the one dressed to the nines as your great-grandmother’s sofa, cause I’m in love #williammorris #wallpaperisbetterwhenitsnotonthewalls #morrisandco #morrisandcoxhm https://t.co/tNDzZ7JcS1 pic.twitter.com/UTWRyGvblz

Attention fashionistos: H&M is selling shirts with William Morris prints for £25 and they are glorious. pic.twitter.com/bIAtt2DcBa

At the same time as news about the launch started spreading on Social Media, I noticed negative remarks too. And those remarks made me wonder. I started to rethink my initial thoughts. I still loved the patterns, don’t get me wrong. But I wouldn’t want to wear clothes that were produced in sweatshops in Bangladesh (or anywhere else)… What should I do? Could I indulge and buy myself a few of those beautiful blouses? Or shouldn’t I? And then there was yet another aspect to it: many of the items are made of 100% polyester fabric. What would William Morris have to say about that?!? 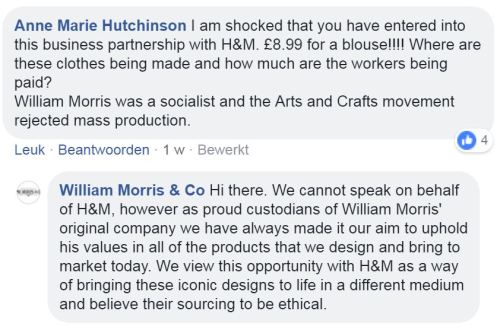 William Morris was associated with the Arts and Crafts Movement and was against industrial production. I shudder to think what he would have thought of this collaboration with H&M… pic.twitter.com/SpKu6YrSum

Mariana in her moated grange feels VERY conflicted about this H&M Morris frock. I think Morris would be really upset by the whole cheap enterprise… but also I like it… (As ever, I am overthinking this) pic.twitter.com/mDgcn6P3Hr

Now who was this William Morris? Why this discussion on Social Media? Here is some background information which I conveniently borrowed from Wikipedia. “William Morris (24 March 1834 – 3 October 1896) was a British textile designer, poet, novelist, translator, and socialist activist. Associated with the British Arts and Crafts Movement, he was a major contributor to the revival of traditional British textile arts and methods of production.

In April 1861, Morris founded a decorative arts company, Morris, Marshall, Faulkner & Co., with six other partners: Burne-Jones, Rossetti, Webb, Ford Madox Brown, Charles Faulkner, and Peter Paul Marshall. The Firm adopted Ruskin‘s ideas of reforming British attitudes to production. They hoped to reinstate decoration as one of the fine arts and adopted an ethos of affordability and anti-elitism.

Have nothing in your houses that you do not know to be useful, or believe to be beautiful

Morris rejected the chemical aniline dyes which were then predominant, instead emphasising the revival of organic dyes, such as indigo for blue, walnut shells and roots for brown, and cochineal, kermes, and madder for red. Living and working in this industrial environment, he gained a personal understanding of production and the lives of the proletariat, and was disgusted by the poor living conditions of workers and the pollution caused by industry; these factors greatly influenced his political views.

The Firm was obtaining increasing numbers of commissions from aristocrats, wealthy industrialists, and provincial entrepreneurs, with Morris furnishing parts of St James’s Palace and the chapel at Eaton Hall. As a result of his growing sympathy for the working-classes and poor, Morris felt personally conflicted in serving the interests of these individuals, privately describing it as ministering to the swinish luxury of the rich.”

Not being able to decide whether I was happy about it or not, I must admit that I gave in and bought myself some blouses. It would be nice to wear when I have to give a presentation about the Arts & Crafts movement, was my excuses. Or maybe I should blame it on my fear-of-missing-out. Anyway, I had these mixed feelings, and I was eager to get some reassurance from either Morris & Co. or H&M. Now H&M seems to be sure they are doing the right thing, saying those people need their job. But what about Morris & Co.?

Below is the answer I received from Morris & Co. through Facebook. Not really reassuring now is it? “We trust that partners…” is not very convincing. It does not demonstrate any ‘ownership’. I am afraid that William Morris’s custodians do not uphold his ethos very high… 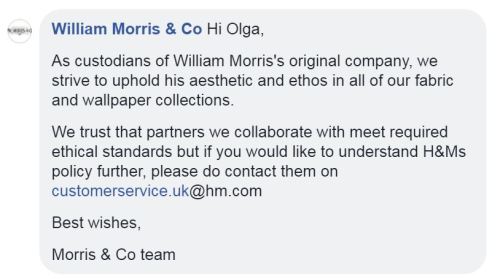 So my mixed feeling remain. I love the William Morris’ designs, and when I look at my new blouses, I am pleased with what I see. But in the back of my head, there’s still something nagging me. Did I do the right thing to buy these blouses? 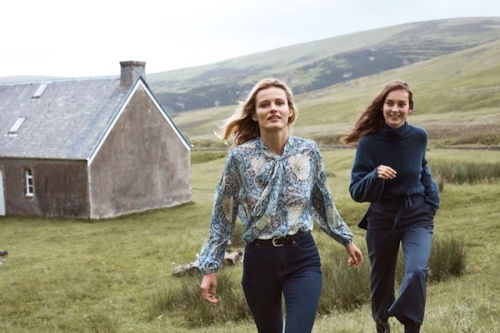 What do you think? Would William Morris turn over in his grave? Or would he be pleased that beauty is now made affordable to the masses? Anxious to hear your thoughts on this. Please leave your comments in the section below.

6 thoughts on “William Morris would turn over in his grave”