In this day and age of digital illustrations and Photoshop, Matt Hughes might be one of a dying breed. In the true spirit of the Art Nouveau Movement, Matt illustrates by hand the pieces that inspire him as an artist. His distinctive illuminations feature graceful lines inspired by nature expressing nothing but emotion and beauty. On the cusp of completing his most recent endeavor, the complete illustrated works of Edgar Allan Poe, Matt has now taken it upon himself to illuminate the lyrics of Mozart’s Requiem, an equally emotional master piece that touches you right in the heart.

People who have been reading my blog for a few years may know that I am following this artist in the USA who’s creating contemporary Art Nouveau for a living, Matt Hughes. I love Art Nouveau. And I have an endless admiration for people who can grasp that ‘thing’ that makes Art Nouveau Art Nouveau. I believe Matt is one of them. When I asked him last week which artists inspire him – because many people only think of Mucha when they look at his work – he gave me a long list of names: Thomas Heath & Charles Robinson (UK), Edmond Dulac (FR), Franklin Booth (USA), Privat Livemont (B), Manuel Orazi (I), Koloman Moser (A), Jane Atche (F), Will H. Bradley (USA), Plinio Codognato (I), Maurice Denis (F) etc… Matt has been studying the works of all these artists for decades, and over the years developed his very own style. You may want to check-out some of the lesser known artists yourself. Who knows what beautiful art you will discover!

Of course I also asked Matt why he chose to illustrate Mozart’s Requiem. After all, Mozart wrote the piece in 1791, long before Art Nouveau emerged. Well, Matt explained, the idea was born when he took his wife Hope to the opera in Atlanta Georgia last year. They went to see a performance of the Requiem. And while they were listening to the music, the lyrics were projected both in Latin and in English on a big screen behind the choir. Although Matt had been listening to the music of the Requiem for many years, this was the first time he could actually comprehend the lyrics. It was the first time, he could understand what Mozart was ‘saying’ with his music. And it hit him like a hurricane!

Matt: “The work whispers (and sometimes shouts): Have I done all that I could with my life? Am I ready to start the next journey from a beginning again? What will that journey be and am I ready? It is a piece of work that every artist dreams of one day producing – a timeless expression from one’s soul to anyone who will listen.”

Half-way through the performance it dawned on him, Why has no one ever produced an illuminated collection of these lyrics from the Requiem? Matt thought of Le Pater, an illustrated edition of The Lord’s Prayer created by Mucha in 1899, and set to work. “It is that inspiration that sparks the drive to take on any project, no matter the size or complexity.”

Their love of art combined with their love of books was what inspired Matt and his wife Hope to found Ethereal Visions Publishing. “The philosophy behind Art Nouveau – that handcrafted higher quality art should be available to all, and it shouldn’t matter whether you’re rich or poor – was similar to what motivated us to start our publishing company. We want to bring back hand illustrated books, cards etc. to the people and eventually branch out to other artists.” In their library, you will find books, card sets, book-plates, and journals that are pieces of art within themselves. “They are treasures that will immerse you into a world filled with beauty, mystery, whimsy, and the macabre through breathtaking artwork. We wanted to create something that added beauty to the world. With this in mind, we decided to create a business to publish collections worthy of any library – big or small.” 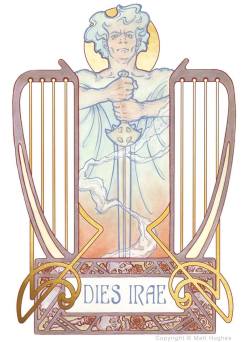 A Requiem, also known as a Mass for the dead, is a Mass (in the Catholic Church) offered for the repose of the soul of a deceased person, using a particular form of the Roman Missal. For Matt, it is also a celebration of life. A testament to one’s absence in this world. A final cry, of joy and of sorrow, for a light now extinguished. “Mozart may have initially been commissioned to write the Requiem, but, on a spiritual level, I think he knew he was writing his own mass that would ultimately be finished by another hand. Mozart’s Requiem is a celebration of the life of a musical genius whose light was darkened far too soon.”

If you are interested in following this project, or if you want to pre-order the illuminated lyrics of Mozart’s Requiem right away, go to www.mozartsrequiem.com and back Matt on Kickstarter. We are little over a week into the campaign and there are still limited rewards available! Don’t miss out on this unique and limited edition of a historical master piece. 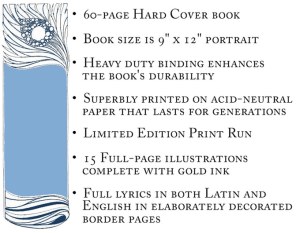