From the moment I laid eyes on her, I deeply fell in love with the Vitebsky Railway Station. But chances of me getting there in person any time soon, taking pictures and sharing that beauty with you, are very slim. So I have asked a local lady, who equally loves this gem, to do the honours…

This is a guest blog by Anna Semerikova, a.k.a. Époque Maudite on Instagram.

I have always loved “the look” of the Vitebsky Railway Station. Even before I realized that this kind of buildings, that I liked more than others, were all built in the Art Nouveau style. A style we call “модерн” (“modern”) in Russia. And I guess everybody knows how it usually goes: when you think you will come back later to discover something, and you’re not in a hurry, planning to take tons of pictures… But years go by and you are still just planning, and waiting for the right weather, the right light, a good mood etc. Particularly if you live in the same city as the architectural treasure!

As for me, I am not a big fan of Russian trains. So I try to avoid journeys by train where possible. Unless there is no other option, and I have to travel by train. Most of the time, that would be in the Moscow direction, departing from the Main Railway Station. Moreover, until the summer of 2018, I was absolutely sure that all the trains from Saint-Petersburg to Moscow were departing from the Main Railway Station.

So when my friends from Belgium and France wanted to see the Russian capital last year, I took them to the Main Railway Station without hesitation. Only when we couldn’t find their platform, I realized my mistake! Their train was waiting for them at the Vitebsky Railway Station. Luckily the stations are not too far apart so we made it in time.

They took a night train, the station was almost empty. The evening was warm and calm. And after my friends had departed – while I was walking through the station back to the metro entrance – I realised that I really MUST come back to take pictures.

I didn’t go back until December though, when I went to see the exhibition Fashion of Russian Modern 1890-1914 that was on display at the station. Unfortunately, it was impossible to take pictures with all this safety glass. I’ll just share one that turned out not too bad.

Winter weather was not good for pictures either. So it wasn’t until the following summer (of 2019) that I finally managed to get inside the Vitebsky Railway Station and take some pictures for my Instagram account. There were very few people and I could take some really good shots. Please enjoy them while you are reading this blog. 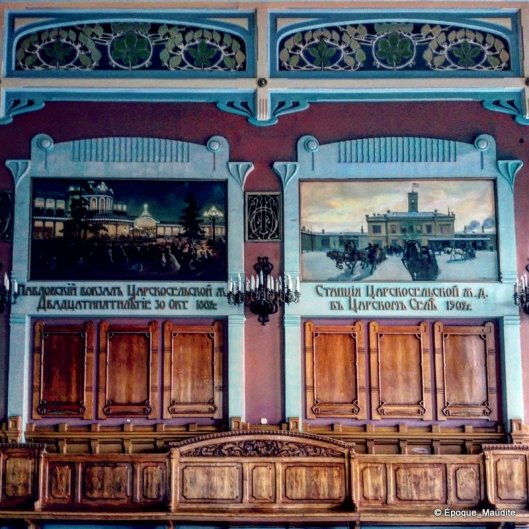 The Vitebsky Railway Station was the first train station in Saint-Petersburg; in fact it was the first railway station in the whole of Russia. First, a one-floor wooden building was built in 1837. That same year the first ever Russian train, called “Provorny”, departed from its platform for the imperial residence at Tsarskoye Selo. The train reached Tsarskoye Selo (25 km away) in 35 minutes, which was a speed record for Russia at that time. Interesting to know is that today you need 28 minutes by train for the same distance (with 5 stops) or 40 minutes by car.

Since the building of the station proved to be too small, it was demolished within twelve years and Konstantin Thon (1794-1881) rebuilt the station in stone, between 1849-1852. At this picture you can see the Railway Station building pictured at September 17, 1900. (Photo from GMZ Tsarskoye Selo Collection). But that is still not the building that I wanted to talk about.

The construction of my favorite Art Nouveau Railway Station, the one we can enjoy today, started in 1901 and lasted for three years. Stanislaw Antonovich Brzozowski (1863-1930s) was the main architect responsible for the exterior of the building. And the wonderful interiors were designed by 25 year old Sima Isaacovich Minash (1877-1945), who is also known as the architect of the Protasov House (The house of M. V. Voeikova) that you can see in above old picture by Karl Bulla.

Going back to the Railway Station, I want to mention that it was one of the first public buildings in the Art Nouveau style. And people actually liked it. (Remember that not all the innovations at the turn of the century were accepted by the public, like the Eiffel Tower, for example.) Amazing, unusual architecture, abundance of metal, complex technical devices, and outlandish for that time: elevators for luggage and passengers, conveyors, rail tracks located at the second floor, electricity… such a miracle of design and engineering could not fail to arouse admiration.

However, our climate and time destroyed the Railway Station step by step and only 2% of the exterior metal decorations was saved. Architectural detail was removed from the facade and halls during insensitive Soviet renovations. As an exception to normal practice during the Soviet years, the Vitebsk station preserved its elevated train shed. Five platforms and luggage elevators remained almost intact, making it an ideal location for filming Soviet adaptations of Anna Karenina, Sherlock Holmes stories, and other 19th-century classics. 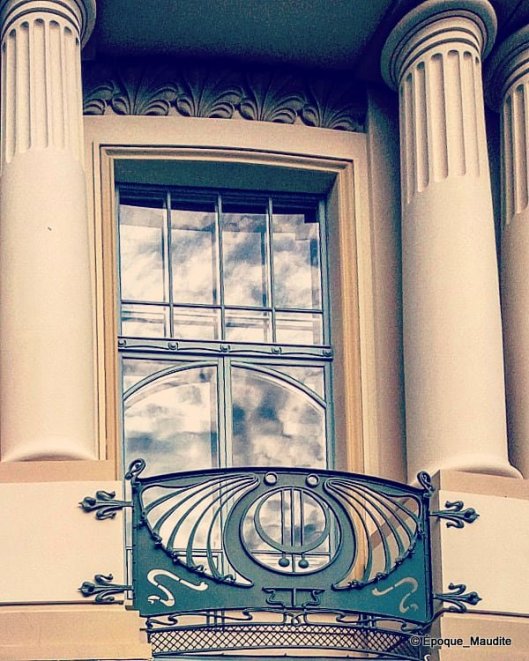 Prior to the 300th anniversary of St. Petersburg in 2001-2002, the station underwent a painstaking restoration of its original interior and art nouveau decor. The dome was restored, the “historical” color of the station was reconstructed, the original facade windows were restored, the stucco decorations were renewed, the marble staircase was re-decorated, the Imperial Cafe was recreated, the missing elements of the original design were restored, and the metal decorations were restored. In 2017-2018, the station was restored again. So today you can enjoy the beauty of that magnificent historical building in all its original splendor!

Apart from the replica of the first Russian train, curiosities of the Vitebsk Station include a detached pavilion for the Tsar and his family and a marble bust of Nicholas I. And… in case you need a hair dresser, you may find one inside the station on the ground floor, not far from the spiral staircase.

Services from the Vitebsky Railway Station run to Central Europe, the Baltic States, the Ukraine, Belarus and the Southern suburbs of St. Petersburg, such as Pushkin and Pavlovsk. The station is connected to the Pushkinskaya Station of the Saint Petersburg Metro. 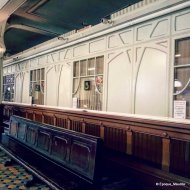 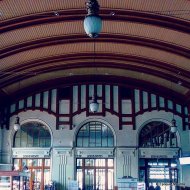 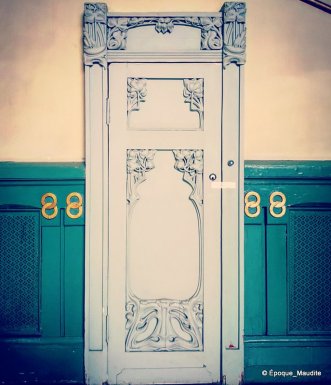 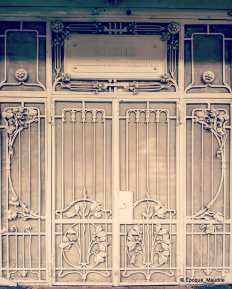 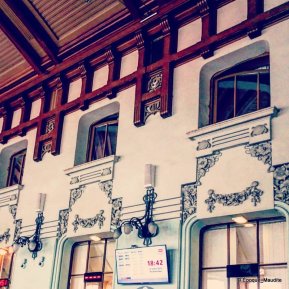 1 thought on “The Vitebsky Railway Station in St. Petersburg”