Last winter, I was invited to Dortmund for the exhibition Rausch der Schönheit. Die Kunst des Jugendstils at the Museum für Kunst und Kulturgeschichte (MKK). And while I was in Dortmund anyway, I was invited to visit Zeche Zollern too. Wonderful, because this amazing site had been on my wishlist since the day I learned about it, several years ago. 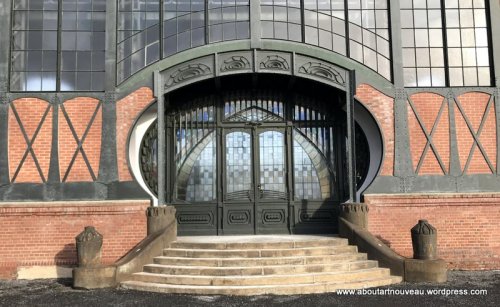 Zollern is a disused coal mine in the northwestern district of Bövinghausen, Dortmund. Built between 1898 and 1904 for Gelsenkirchener Bergwerks-AG, Zollern was a model colliery to demonstrate prosperity and modernity. Coal mining began in 1902, and as early as 1905, a tourist guide pointed out the majestic beauty of the Zollern II / IV colliery. “It rather resembles a feudal castle courtyard than an industrial site, with a machine hall that outshines most of the state rooms in terms of size and beauty.” The name of the mine is a patriotic tribute to the House of Hohenzollern, the royal family of which came Prussian and Romanian kings and German emperors.

Arriving at the Zollern Colliery Complex 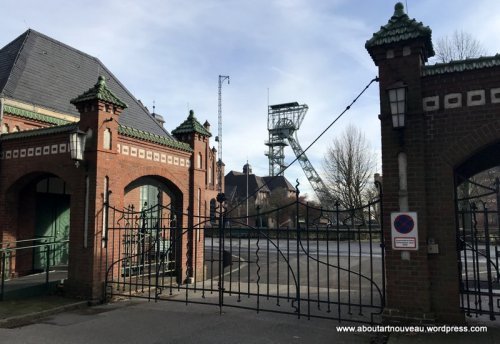 At the end of the 19th century, the economic upswing caused a turbulent industrial boom. In the 1890s alone, more than 70 new pits were created in the Ruhr district. Major mining companies wanted to underline their leadership by building particularly high-quality, exemplary model collieries. Many of these new mines were created as complete works of art. But don’t think now that these mining companies competed because they wanted to have the most beautiful colliery. The idea behind the pomp and circumstance was, that mining companies needed lots and lots of money from investors. And investors are more likely to invest in ‘solid and successful’ companies. Hence the model-collieries, showing off prosperity.

Most of the buildings at the Zollern colliery were designed in solid brickwork by architect Paul Knobbe (1867-1956). He adorned the facades with magnificent neo-Gothic stepped gables and onion turrets. The administrative building, seat of the management, demonstrated the power and representational ambitions of the mining company in a national and international context. The monumental ‘Lohnhalle’ (hall were salaries were paid) claimed authority of the management towards their workforce. 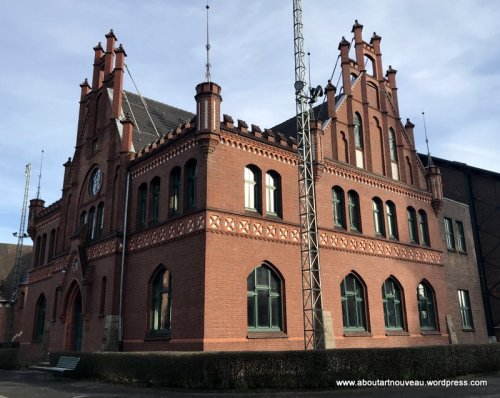 The neo-Gothic architecture at Zeche Zollern

Other buildings on the site include administration bureaus, a blacksmith’s shop and a carpenter’s shop, a first-aid and fire station with stables, pithead baths, tool stores and a central gateway.

First-aid and Fire Station with Stables

Gothic architecture had considerably inspired the English Arts & Crafts Movement, forerunner of the Continental Art Nouveau Movement. But as Gothic revival architecture had peaked by the 1870s, it wasn’t the most fashionable architectureal style any more… 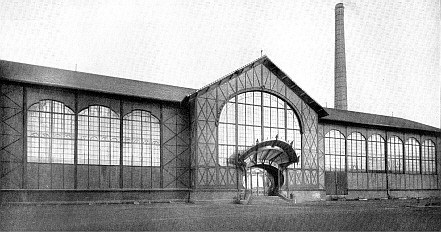 From the GHH catalogue (Brückenbau-Abteilung)

And when Knobbe submitted his design for a neo-Gothic machine hall in April 1902, it was rejected. He had decorated the outer walls with opulent brick friezes, ornamental gables and pinnacles; significantly richer than was usual for such halls at the time. He apparently wanted to emphasize the importance of the structure for a modern, efficient colliery operation.

Facade plan for the machine hall by Paul Knobbe (not executed)

Instead, beause of “deadline pressure”, the Gelsenkirchener Bergwerks-AG (GBAG) opted for a more modern hall. Their most up-to-date generators and machinery were to be housed in an unclad steel framework with infilling of red brickwork, built by the Gutehoffnungshütte (GHH). Berlin architect Bruno Möhring (1863-1929) designed the famous Art Nouveau entrance in 1902-1903. But was it really deadline pressure? Or was competition the real reason why another architect was called in to design the central machine hall in a more trendy style? I guess we’ll never know the real reason…

Modelling for the new machine hall was the pavilion Bruno Möhring had designed for Gutehoffnungshütte (GHH) in 1902, to showcase their products at the Düsseldorf Industrial Exhibition. The building caused a sensation at the time! Contrary to the other exhibition halls, it showed the supporting steel structure openly. With four pillars, the transept seemed like a church made from steel. A stained glass window idealised the mining industry. The pavillion was só special actually, that after the exhibition was over, the building’s four halls were purchased by José Landero y Coss, shipped, and reassembled in Mexico city. It is currently known as the Museo Universitario del Chopo. 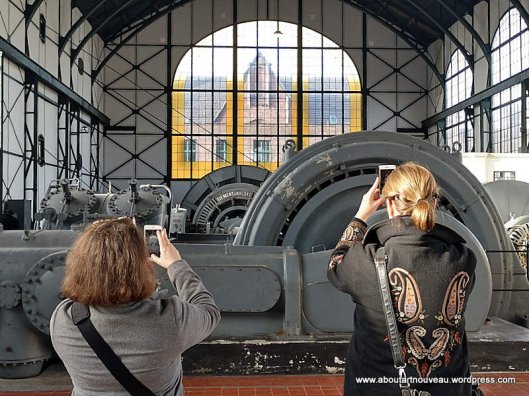 Maria-Bettina Eich and I at work, © Anke von Heyl

Machine halls, that is, central halls for several machines of different functions, arose in the Ruhr mining industry mainly between 1895 and 1914. Previously, the individual steam engines of a mine had been placed near the associated shafts. At the new model collieries, the machine park (which now also included steam-operated fans for ventilation of the underground area and compressors for producing compressed air) was centrally grouped. This facilitated better maintenance and supervision, and allowed for short steam lines that greatly reduced energy loss.

Even more than coal, steel was considered a hallmark of industrial progress (a good example is also the Eiffel Tower) so the Zollern Machine Hall can very well be interpreted as a symbol of the successful mining industry in the Ruhr area.

Opposite the main entrance of the machine hall is a big control board of polished marble in brass mounting, with a brass clock hanging from above. From here, the entire mining operation was controlled as Zollern II / IV was the first fully electrified coal mine at the Ruhr area. Looking closely, some of the marble details reminded me of Victor Horta’s Hôtel Aubecq. Do you see it too? 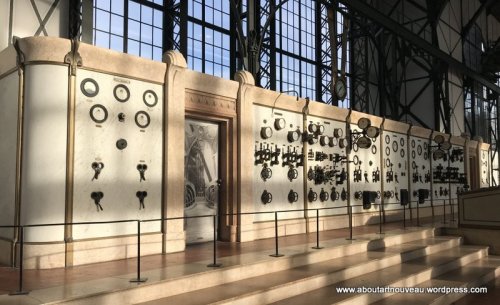 From a Model Colliery to a Museum and Festival Venue

Today, it is hardly conceivable that in the 1960s, there were plans to demolish all the buildings. Thanks to the persistent commitment of a few individuals, in 1969 (only three years after it closed down) the colliery was recognized as Germany’s first industrial heritage site of international importance. Since 1981, it has been the headquarters of the Westphalian Industrial Museum. And after extensive restorations the Zollern colliery was opened to the public in 1999. The museum is part of the European Route of Industrial Heritage and the Route der Industriekultur.

Besides all sorts of events, there is a permanent exhibition ‘Social and Cultural History of Ruhr Mining’ on control and safety, miners lamps, pit accidents and accident prevention, hygiene and health etc. But I mostly enjoyed the exhibition at the old administration building which relates the history of the Zeche Zollern to the history of the Ruhr area. The outside of the building is clearly neo-Gothic, but the interior also shows similarities with Berlage’s Nieuwe Kunst in The Netherlands. And I just loved the riveting of the wrought iron and steel stairs! 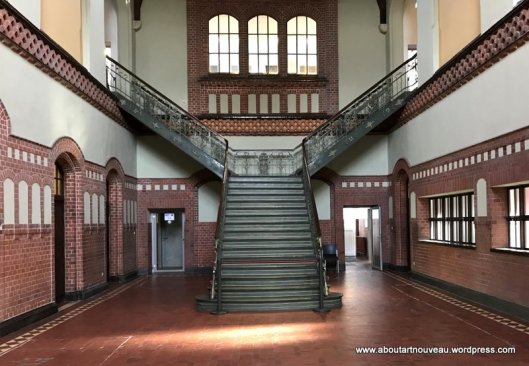 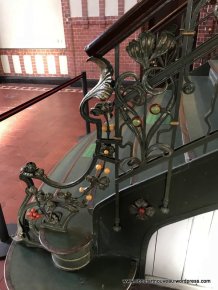 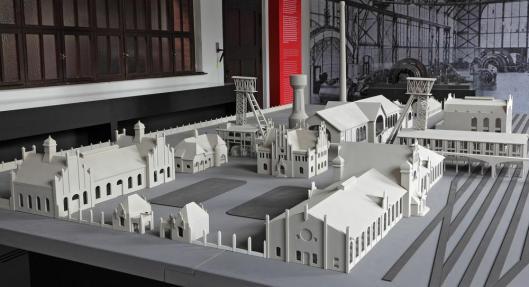 Historic colliery model of Zollern, made for Liège World Fair 1905

The museum reminds us of earlier times and offers a glimpse into the history of the heavy industry of the past century. The fantastic architecture and state-of-the-art technology at Zeche Zollern perfectly illustrate the transition from Gothic-revival to Art Nouveau and the industrialization of the early 1900s.

In short, a wonderful day filled with history lessons and beautiful architecture. Want to see more pictures? Check out the tag #zechezollern on instagram!

One last thing I want to mention: during the research for this article, I discovered that Bruno Möhring also created a lot of Art Nouveau architecture in Traben-Trarbach. So when you put Zeche Zollern on your to-do list, you might want to add Traben-Trarbach as well.