When I visit the Brussels Art Fair (BRAFA) I always expect to see beautiful paintings and sculptures. Other objects, and then I mean the applied decorative arts, can take me completely by surprise. Beautiful pieces of jewellery, like for instance Wolfers’ choker Glycines, can take my breath away. This year, my biggest joy at the fair is the exhibited furniture! Not because of the quantity, but because the pieces are of exquisite museum quality!

Art Nouveau Furniture at the BRAFA

Not often do I come accross exceptional Art Nouveau furniture at the BRAFA. Or at any other fair for that matter. The only Art Nouveau furniture that shows up regularly is Émile Gallé marqueterie. Beautiful, but I have seen só much of it already… So when I run into furniture from other designers, I can get really exited!

Francis Janssens van der Maelen’s scope extends from silver to sculpture, ceramics and furniture. In 2017, I already shared some of his wonderful pieces with you here. This year’s biggest surprise for me is the furniture he is showcasing: a set of two chairs and a camphor wood sofa partially inlaid with stylized decorations in ebony and ivory, by Dutch designer Chris Wegerif (1859-1920). 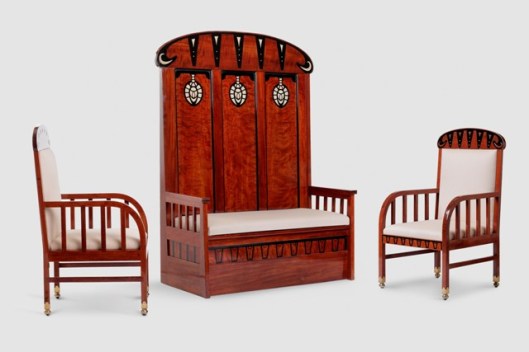 This furniture was first exhibited at the International Exhibition of Modern Decorative Art, in Turin in 1902. I have immediately notified the curator of Kunstmuseum Den Haag, as I strongly believe this set belongs in their collection. They already have other objects from the same Turin exhibition, like the pendulum that was showcased at the Art Nouveau in Nederland exhibit in 2018. 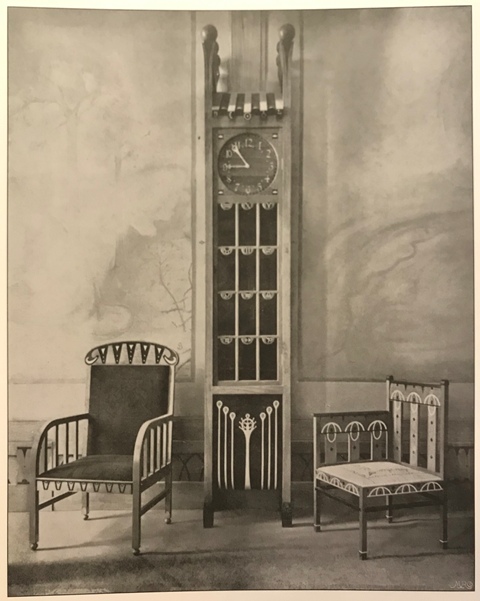 And the Rijksmuseum in Amsterdam has a part of this interior set in their collection as well. They own the paravent that Chris and Agathe Wegerif designed for it. As the paravent still holds it’s original batik fabric, we can get an idea of the original colour setting of the furniture. Maybe the original upholstery fabric of the chairs was a royal blue, or a lush dark red?

Show stopper at Paolo Antonacci from Rome was supposed to be, without a doubt, a wooden picture frame by Carlo Bugatti (1856-1940). But when I got to the fair, it turned out the picture frame never made it to Belgium. Antonacci didn’t get permission from the Italian government to export the object as a decorative arts museum had shown interest in it. They now get three months to consider to buy it. But by then, the BRAFA fair will be over. So I am sorry I didn’t get to see it ‘live’, but on the other hand I would be pleased if it were hanging in an Italian museum for everyone to enjoy.

Over the years, most people were flabbergasted when I introduced them to the Moorish works of Bugatti. Even those who consider themselves knowledgable about Art Nouveau, would not believe me when I told them this is also considered Art Nouveau. Unlike his contemporaries who looked to Japan in the Far East for exotic inspiration, Bugatti mainly got his inspiration from the Middle East / North Africa. He used inlays of exotic wood, copper and parchment (bleached deerskin) in his designs as well as mother of pearl.

Interior design by Carlo Bugatti for the International Exhibition of Modern Decorative Art, in Turin in 1902

Heritage Gallery was founded in 2006 by art critic and collector Kristina Krasnyanskaya. Along the way, the gallery specialized in Soviet collectible design from the 1920s to the 1970s. And now Krasnyanskaya is bringing a very exiting furniture set (consisting of 7 pieces) to the BRAFA. The furniture is said to be commissioned by the People’s Commissariat of Defense (НКВД, Defense Ministry) for the Memorial Office’s Voroshilov Corner. Voroshilov (1881-1969) was a prominent Soviet military officer and politician during the Stalin era. 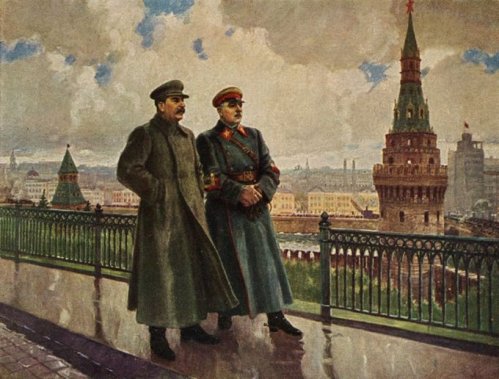 Stalin and Voroshilov in the Kremlin (1938) by Aleksandr Gerasimov

According to Krasnyanskaya, in 19th century Tsarist Russia every household had a Red Corner, a particular corner of the room where one or several ikons of saints were hung. After Lenin’s death in January 1924, his body was embalmed and placed in a mausoleum, built for this purpose in the Red Square in Moscow. Small shrines, so called Lenin Corners, were introduced in workplaces and villages, designed according to guidelines issued by the Party in February 1924. They were clearly meant to replace the previous Orthodox tradition. This phenomenon is called Cult of Personality. The furniture for the Voroshilov corner was created for the same purpose, propaganda for and worship of a political and military leader.

Interesting to note is, that the furniture is dated 1938. That is really late for Art Nouveau. But it shows that the Art Nouveau era did not end everywhere with WWI. I have learned that, as you move away from Brussels to the north-east, you will find Art Nouveau from much later dates. The further away, the later the dates. 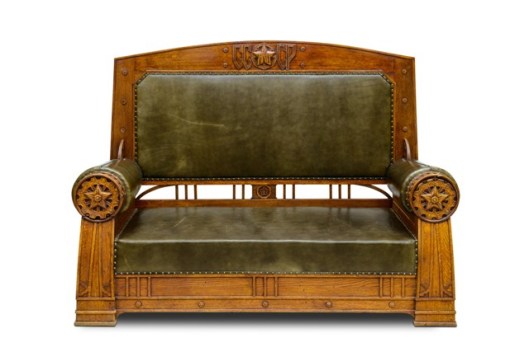 The symbols of the Soviet State, a hammer, sickle and stars, are combined with symbols of intensively developing industry, gears. In the backrest of the sofa the abbreviations СССР (USSR) and НКО (Narodny Comissariat Oborony – People’s Commisariat for Defense) are tangled together and accompanied again by the star and gear symbols. At the back of the sofa are two labels: a paper label from the Special Workshops of the Red Army Production, and a metal tag of a certain Mikhail Frunze Club. (I don’t know what kind of club that is, or how it is involved.)

As much as I would love to bring this sofa home, I think it ought to return to Russia, the country where it belongs. From the bottom of my heart I hope the Russian Museum of Decorative and Applied Art can buy the set so it will remain visible for the Russian people. The furniture is only sold as a complete set. 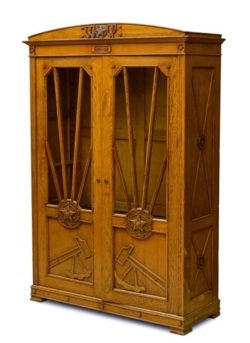 Art Nouveau Jewellery at the BRAFA

Of course, there is some fine Art Nouveau jewellery to be admired at the fair as well. Here’s what my favorite jewellers have brought along for us this year!

Chamarande has brought a lovely Art Nouveau pendant in gold and enamel by Georges Le Saché (1849-c.1920). It’s a magnificent 18-carat gold pendant adorned with a carved ivory figure of a naked nymph, standing under wisteria branches. The pendant comes with a brown leather fitted box with a metal plate inside which reads La Fée aux Glycines. Le Saché was a great jeweler who worked in the shadow of his big customers, like (his father-in-law) Boucheron or Tiffany. If you have never heard of him before… that’s because he preferred to remain anonymous. Le Saché worked to commission and sold only through agents but his pieces are now in some of the most important jewellery collections in the world!

I always find it fascinating to fantasize about who originally bought the jewellery and for whom. And what the lady would have worn to complement her new jewellery… Did she wear a French designer outfit, or did she prefer a more modern Aesthetic Dress? I don’t recall ever seeing pictures of ladies wearing Art Nouveau jewellery. But as I am currently preparing an article about the Aesthetic / Reform Dress, I will pay more attention to the pictures and search for signs of jewellery!

Epoque Fine Jewels is showcasing a lovely Pansy bracelet by René Lalique (1860-1945). The bracelet consists of 5 floral clusters, each composed of four pansies in carved frosted glass, surrounded by purple enamel and pearls, and cushion- and oval-shaped sapphires, all mounted in 18 karat gold. This bracelet again demonstrates how extraordinary talented Lalique was.

Art Nouveau in Pastels and Paint

Somehow, Alexis Bordes always manages to bring the most interesting paintings to the Brafa in terms of Fine Art. If you have missed my review of last year’s Brafa, you can read it here. It includes some excellent paintings that you should check out.

More Exciting Works of Art at the BRAFA 2020

Right at the entrance of the fair, at Galerie Mathivet, I discovered an 1893 vase with a crab by famous potter Pierre Adrien Dalpayrat. Another exciting discovery for me was the work of Walter Sauer. There were actually two of his artworks at the fair. One at Galerie Harold t’Kint de Roodenbeke, the other at Galerie Alexis Bordes.

And a new interesting galerie for me was Galerie Berès from Paris. They had several items that I liked a lot. Like an 1891 drawing for a piece of furniture for La Maison des Arts Decoratifs, decorated with Dancing Dogs by Pierre Bonnard. Another painting that I would like to give some special attention is the 1893-1895 work by Maurice Denis called Les Harpistes. It reminded me very much of the early 2D work of Henry van de Velde, about which I wrote an article after I saw the exhibition A Line is a Force in 2017.

At Studio 2000 Art Gallery I discovered two works by Jan Toorop. And of course I loved the famous Loïe Fuller lamp by Raoul Larche at Univers du Bronze! 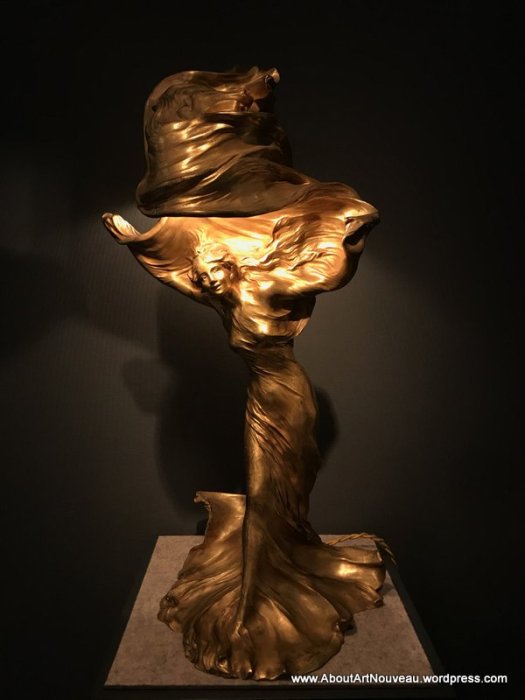 Last but not least, I would like to mention the effort of Samuel Vanhoegaerden. After 10 years of collecting and studying he now showcases an extraordinary collection of works by James Ensor (1860-1949). Thirteen paintings (canvases and panels) are shown along some twenty drawings, which are extensively described and studied in a new book/catalogue with more than 100 illustrations, to provide an improved insight into the world of James Ensor. This unique exhibition aims to bring the artist closer to the general public and, in addition to the paintings and drawings, includes photographs and documents made available by the Ensor archives. 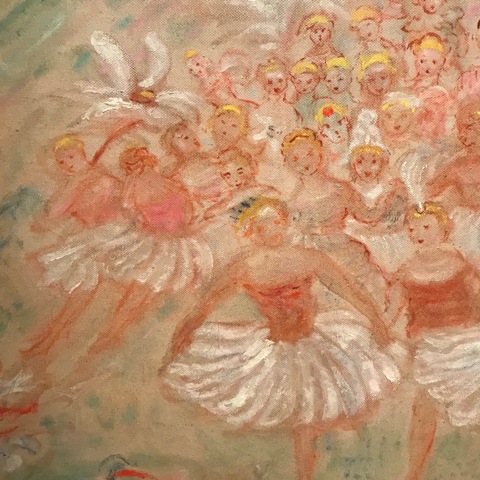 Ensor was one of the founding members of the artistic group Les XX (Les Vingt), a group of twenty Belgian painters, designers and sculptors, formed in 1883 by the Brussels lawyer, publisher, and entrepreneur Octave Maus. For ten years they held an annual exhibition of their art. And each year they also invited twenty international artists to participate in their exhibition. In 1893, the society of Les XX was transformed into La Libre Esthétique.

To tell a long story short: the BRAFA is buzzing with beauty again and I utterly enjoyed myself. If you love art too, do yourself a favour en make sure you visit the fair before it’s over. The BRAFA lasts until sunday 2 Februari 2020.