A new Art Nouveau exhibition just opened at the Dutch Lithography Museum. It covers the development of early Poster Art in The Netherlands, between 1890 and 1915. In this turbulent period well-known Dutch painters (fine arts) and leading graphic artists (craftsmen) designed high-profile lithos. They worked on the cutting edge of Art and Advertising, and created works with a wide range of characteristics. This exhibit showcases examples from all angles of the spectrum.

Design Contest for an Advertising Card 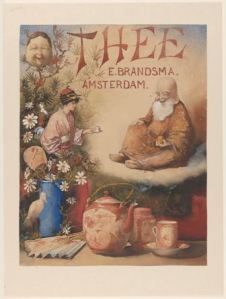 For the exhibition catalogue guest author Marjolijn Velthuizen wrote an intriguing story about the birth of Dutch poster art. She reveals how a famous Dutch tea trader called Engbertus Brandsma organised a contest in 1890, both in The Netherlands and in Germany, to “…obtain a design for an advertising card.” Working with a jury of prominent people from the established art scene, and offering large sums of money to the winners, he ensured the participation of well-known artists. Brandsma received hundreds of submissions, both from The Netherlands and abroad. Making advertising posters had – until then – been regarded as ‘plebeian’ but thanks to our tea trader, it was now, together with lithographic printing, lifted to a entirely new artistic level.

Brandsma had a nose for advertising and milked his design-contest to the max. For the Dutch jury, he invited several highly respected directors of art academies, famous painters like Jozef Israëls, Jan Veth and Antoon Derkinderen, and the architect of the Rijksmuseum, Pierre Cuypers. The German jury was of a similar caliber. From 207 works submitted in Amsterdam, the jury selected the best 9 works. In Berlin, the jury selected 6 favorites. Winning art works in Amsterdam were announced in February 1891, while the announcement of the winners in Berlin followed in March.

The first prize (500 Guilders) in Amsterdam went to Edzard Koning. A second prize (300 Guilders) was for Abraham Gips. In Berlin, the unanimous winner was Marius Bauer, a painter from The Hague while the second prize was for Max Seliger, a local painter from Berlin. Exhibitions of the submitted art works were organised in Amsterdam, Berlin, Haarlem, Rotterdam and The Hague. Entrance fee was 25 cents and all proceeds were donated to a good cause.

There was also a prize for the design that would be most suitable as an advertising poster. Brandsma chose the winner himself, from the 15 designs that had been selected by the juries. And thát winner was Tao Ming by designer duo Ernst Witkamp and Nicolaas van der Waay. In June 1891, Brandsma immediately announced the next contest, an aptitude test for printing companies. He wanted the winning poster design to be executed at the highest possible level of lithographic printing. Examples from printers all over the continent were sent in. Brandsma granted the job to S. Lankhout & Co. from The Hague, a firm praised for its high quality colour reproductions. Winning this competition benefitted Lankhout as well; they would receive many more commissions to print Dutch art posters, among which the famous poster for Delftsche Slaolie (1894) by Jan Toorop.

Lankhout used no less than 14 colours to print Tao Ming when converting Witkamp and Van der Waay’s original watercolour into a lithographic advertising poster. And Brandsma was so satisfied that he actually commissioned Lankhout to reproduce all winning designs, though in a reduced size. They were published in 1892 as a leporello booklet (accordion booklet) that could be obtained for a small amount at Brandsma’s tea shop. Proceeds, again, were donated to a good cause.

Leporello of the Design Contest for Brandsma Tea, 1892

Dutch Poster Art was born years before a clear-cut idea defined what an advertising poster should look like. Years before Art Nouveau and affichomania exploded halfway the 1890s. Brandsma was ahead of his time and got the art scene involved to reach an incredible artistic level. Internationally, it would take a while longer to get the poster accepted as a well-established art form. 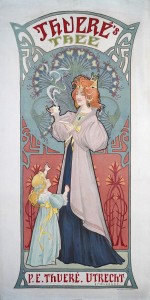 Of course we can enjoy Tao Ming at the exhibition. But there is so much more to discover! The (above) video of the virtual opening is evidence that the exhibition comprises lithographs by famous Dutch artists such as Jan Toorop, Jozef Israëls, Richard Roland Holst, Antoon Derkinderen and Jan Sluijters. It also includes book covers and occasional graphic art (book plates, calendars, concert programs, prospectus etc.) from the same period. All-in-all a very versatile collection of sometimes refined, floral and graceful and at other times remarkably geometric designs. The exhibition paints a rather complete picture of a ‘New Art’ emerging in The Netherlands from the advertising and printing point of view. A must see for those who wish to understand what was going on in The Netherlands. 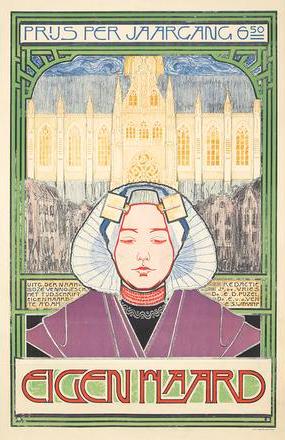 A very complete exhibition catalogue (including several well written essays by curator Lisette Almering and photos of most of the exhibited objects) can be obtained in the museum shop as well as online www.steendrukmuseum.nl/webshop for the rediculously small amount of €7,50 + shipping.