On the last day of summer in 2018 (a beautiful 13th of October!) I visited Hunting Lodge Saint Hubertus, one of the most iconic buildings in The Netherlands. Prominent Dutch architect H.P. Berlage (1856-1934) designed this country house somewhere around 1914-1915 for the Kröller-Müller family. And visiting the place had been on my bucket list for quite some time… 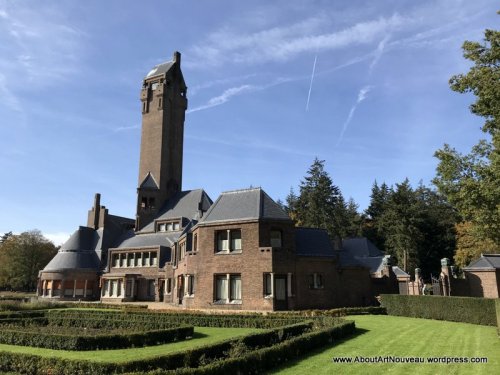 Before I tell you about the building, I would like to introduce you to the couple that built it, Helene and Anton Kröller-Müller. Helene Emma Laura Juliane Müller was born on 11 February 1869 in Horst, Germany, as the third child of Emilie Neese and the wealthy industrialist Wilhelm Müller. When she was only fourteen she learned about the ideas of enlightened writers and philosophers like Goethe and Spinoza. Later in life, she would work out her motto ‘spiritus et materia unum’ (spirit and matter are one).

In 1888 (at age 19) Helene married the Dutchman Anton Kröller (1862-1941), who had worked at her father’s company since 1883. The couple settled in Rotterdam, where Anton was in charge of a branch of Müller & Co. And when in 1889 Helene’s father unexpectedly died, Anton became director of the entire company at the age of 27. Under Anton’s leadership, Müller & Co. grew into a highly profitable, international company in ore and shipping.

Helene and Anton got four children: Helene (junior), Toon, Wim and Bob. When the family moved to The Hague, Helene and her daughter took art appreciation classes from H.P. Bremmer. Soon, Helene invited Bremmer to give her private lessons at her home; a turning point in her life. She started collecting art under Bremmer’s influence, and in 1907 she actually employed him as her personal advisor to ‘assist in assembling an art collection’. While Helene had already been collecting antique furniture, ceramics and Asian art for several years, from 1907 onwards, her focus turned to modern painting. And as Bremmer was a great admirer of Vincent van Gogh, it is not surprising that Helene’s first purchases were from the then still rather unknown artist.

Tea room on the ‘sunny side’ of the hunting lodge

Another important person in Helene’s life was Salomon (Sam) van Deventer (1888-1972). Sam was hired in 1908 as the youngest clerk at the firm. During my tour of the Hunting Lodge, I learned that Helene and Sam in all probability had a liaison; they wrote each other thousands of letters. Sam had his own quarters at the Kröller-Müller estate in Wassenaar. And at St. Hubertus, his room was connected to Helene’s rooms while her husband’s rooms were in the other wing! As Sam was 20 years younger (and for other obvious reasons), her children did not approve of this relationship. They chose to shut Helene out of their lives. And it was said that losing her children made Helene focus on art even more. She invested all her love into the creation of her museum collection, which would turn out to be one of the most important art collections in The Netherlands (currently at the Kröller-Müller museum).

When Helene had to undergo a life-threatening operation in 1911, she decided, if she were to survive the operation, to have a special museum built for her collection. And with that decision, her method of collecting changed. She was no longer guided by personal taste but rather started to collect works of art that ‘could withstand the test of time’.

Helene increasingly accompanied Bremmer on visits to galleries and auctions in the Netherlands and abroad. In April 1912 while in Paris, she acquired 15 paintings by Van Gogh as well as two harbour views by Georges Seurat and Paul Signac. Shortly thereafter, she purchased another 15 paintings at an auction in Amsterdam, including work by Jean-Baptiste Corot, Jan Toorop, Odilon Redon and Honoré Daumier, and four more paintings by Van Gogh.

Thanks to the wealth her husband accumulated, Helene was able to gather an extensive collection that was first exhibited in 1913, in The Hague.

When Helene became director of the Buildings Department of the company, she started working with the architect H.P. Berlage and artists like Bart van der Leck and Joseph Mendes da Costa. One of Berlage’s first assignments for the Kröller-Müller couple was to design an office building at Bury Street in London. He was also asked to design De Schipborg Estate, a self-sufficient model farm in Anloo (Drenthe) for their oldest son.

Some people might argue that Hendrikus Petrus (Hein) Berlage (1856-1934) did not create Art Nouveau architecture. First of all, because he openly rejected the flamboyant and decorative style himself. He thought his colleagues in Belgium and France were disturbingly over-decorating. But the fact remains that also Berlage, in hindsight, was part of that movement that evoked a completely new vocabulary in architecture. A rational Dutch New Art.

Between 1915 and 1920, Berlage worked on the commission for Helene and Anton Kröller-Müller’s Hunting Lodge. For the design, Berlage got inspiration from the English Country House. Examples of characteristics that point in that direction are the special rooms for each family member, like the library, smoking room, boudoirs and the billiards room. The floor plan of the hunting lodge is a reference to antlers, and thus to the eponymous saint of the hunting lodge, Saint Hubertus, patron saint of the hunt.

Other characteristics that give Hunting Lodge Sint Hubertus such a distinctive look are mainly due to the characteristics of Berlage’s work. Think of extreme geometric precision, natural stone elements, glazed tiles, cassette ceilings and integrated ‘applied art’. Besides the building, Berlage also designed the interior, the furniture, the gardens, service buildings and even the cutlery. So, yes! (And this is a typical characteristic of Art Nouveau architecture…) Berlage created a Gesamtkunstwerk! 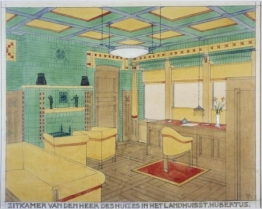 Now, Berlage got carte blanche and was free to design as he liked. But Helene interfered with his plans regularly. Helene insisted on a tower. It made no sense and had no function whatsoever, but the Palazzo Vecchio in Florence had a tower and that is why she wanted one too. Slowly, a sense of dissatisfaction arose as Helene kept engaging in the designs, beause this led to constant adjustments. In Berlage’s eyes any disruption or concession would affect the design as a whole. And when Helene asked Berlage in 1919 to add a round bay window that disrupted the symmetry of the almost finished building, he quit.

In 1921 Helene wrote to her son Bob: “For me, he was always the little man, the grumpy man, the ugly unpleasant character, yet – the great artist!” She then asked Berlage’s opponent Henry van de Velde to finished the project. (Salient detail: years later Bob would marry Henry’s daughter, Thylla van de Velde)

Helene’s bay window, the reason for Berlage to quit…

The building was very modern and luxurious at the time. It had its own generator for electricity, hot and cold water from its own well, a central vacuum system, a centrally regulated clock system and an elevator that still works today. The windows at ground floor level could sink completely into the basement wall. Furthermore, every window had a teak roller shutter.

When you enter the hall, the light is tempered by the stained glass windows. All walls are of a dark yellow brick, glazed at the Delft pottery ‘De Porceleyne Fles’. The tall gun cabinet, designed by Henri van de Velde, as well as the stair railing and other interior details, are made of very dark and delicate coromandel wood. In this area, the mood was deliberately kept gloomy, as Berlage wanted to express the first phase of life of Hubertus.

The stained glass windows (designed by Arthur Hennig from Bunzlau) can be read as a comic strip: the first window portrays the life of the saint as a dark chaos. The central window shows the confrontation with the mystical deer and at the last window, Hubertus’ world is light, radiant and peaceful.

Dark double doors lead to a large dining room (located along the pond) which is bathing in an almost blinding light. In contrast to the dark hall, everything here is warm, colorful and radiant. This room symbolizes the full life in which the saint found the shining truth. The ceiling consists of bricks, glazed in three colors: blue for the sky, yellow for the stars and red for the glow of the sun. The floor was given the colours of the forest in which Hubertus went hunting: a mosaic of 26,000 specially made glass floor tiles – in all sorts of green – produced at Royal Leerdam. 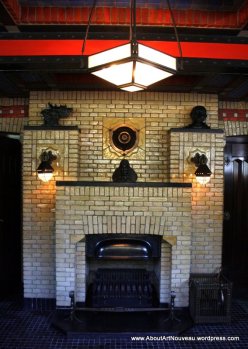 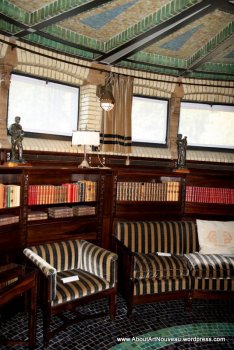 Besides the building, Berlage designed the crockery, glassware and table linen as well as all the heavy furniture. And he planned the park that surrounds the hunting lodge, including the massive man-made pond in front of it.

When the Hunting Lodge was completed in 1920, Anton and Helene used the lodge mainly as a country house. Only in their final years did it become their permanent residence. When the couple saw their capital shrinking during a world wide economic crisis, they were forced to allocate the St. Hubertus hunting lodge and their art collection in a foundation. Only this way, their possessions could stay together and – just as they had wanted – remain accessible “to the benefit and enjoyment of the community”.

Social Recognition of the Nouveau Riche

In 2013, I wrote an article about the relation between Art Nouveau and the Nouveau Riche. Industrialisation had caused a new upper class to emerge. And this Nouveau Riche soon developed a distinct taste for luxury goods. Whereas the nobility would inherit their castles, furniture and art, the new elite had to build their ‘pomp and circumstance’ from scratch. Their own strict rules of protocol and good manners demanded they distinguish themselves through refinement, knowledge and exclusive property. 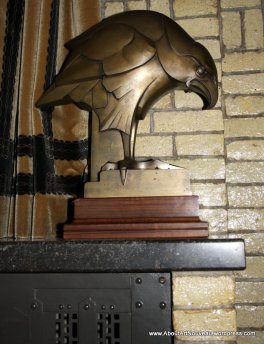 The Kröller-Müllers had made a fortune. However, in circles that mattered (read: the old aristocracy), they served as parvenus, which was unbearable for Helene. With a hunting lodge at the Veluwe, right next to the domains of the royal family, she hoped to gain that longed for social recognition. Money played no role. Berlage was hired for a period of ten years with a generous salary. And the hunting lodge is unmistakably his design. But it also breathes the cold aloofness of Helene Kröller-Müller. A small, strong, ambitious woman full of high artistic ideals, yet hardly able to communicate with others on a human level.

In this ambiance, which is entirely focused on appearance, Helene and Anton Kröller-Müller celebrated their fifty-year marriage in 1938. Without their children, because Helene was no longer on speaking terms with them. She died a year later, exhausted.

Personally, I am not particularly fond of Berlage’s rational style. I don’t really like the colours chosen by Van der Leck. Nor do I appreciate the angular shapes in the stained glass window. But ‘understanding’ Berlage’s hunting lodge provides a crucial link when trying to understand what happened in The Netherlands. Art Nouveau developed here just as it did in the surrounding countries. But where the French looked to the Belgians, and the Scandinavians looked to the Germans, the Dutch looked to the English… and their Arts and Crafts movement. In the Netherlands, we actually got two directions: a rational style based on the Arts and Crafts ideals, and a flamboyant style based on what was going on in Belgium, France and Germany. Soon I will write about yet another hunting lodge, one that is much more flamboyant than this one…

List of artists that contributed to the build of hunting lodge:

A video about Helene and Anton Kröller-Müller and their museum (in English):

A video about the restauration process of the hunting lodge (in Dutch only):